Paving the way for life on land 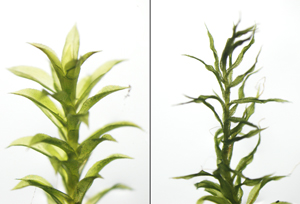 The colonization of land by the first land plants was a key step in the evolution of life on Earth. The exact circumstances of this shift, however, have not been fully explained. Taku Demura and colleagues from the RIKEN Center for Sustainable Resource Science have now contributed to the identification of a major set of plant genes that control two fundamental properties required for terrestrial life: structural support and water transport1.

Demura and his colleagues, in collaboration with researchers from the Nara Institute of Science and Technology, studied the moss Physcomitrella patens as an example of one of the earliest lineages of land plants. They identified eight genes in the gene family called PpVNS that are homologous to the NAC cluster in higher plants. “NAC genes are found in all terrestrial plants, but not in algae, animals or bacteria,” notes Demura. Interestingly, primitive liverworts have only one such gene, suggesting that rapid gene duplication occurred during the early evolution of land plants.

Studying the expression of PpVNS genes within P. patens, the researchers found that most were strongly expressed in the leaf midrib—tissue that includes the moss’s version of water-conducting and structural cells. To explore the function of the PpVNS genes, they created triple mutants lacking three of the genes. The mutants displayed poor water transport, were prone to wilting and lacked normal water-conducting and structural cells (Fig. 1), showing that the PpVNS genes are crucial to the development of these cell types. In contrast, enhanced expression of PpVNS genes caused cell death, which indicated that these genes also play a role in the death of water-conducting cells, just as the NAC genes do for higher plants.

Importantly, the PpVNS genes regulate the same families of downstream genes in both P. patens and higher plants, indicating a shared, ancient evolutionary origin for the NAC and PpVNS systems. Pinpointing the evolutionary origin will require genome information of other mosses and algae—information that will soon be available according to Demura. Nevertheless, the group’s findings already highlight the importance of the NAC and PpVNS systems in regulating the development of both structural and water-conducting cells, and allowing the first plants to colonize the land.