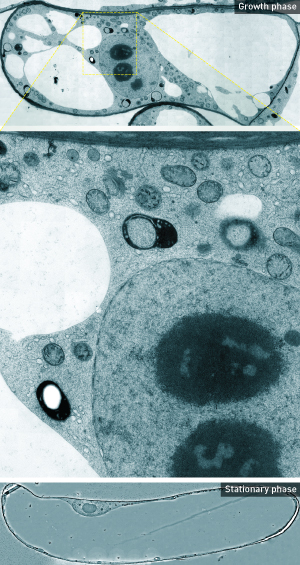 A research team led by Kiminori Toyooka from the RIKEN Center for Sustainable Resource Science has developed a sophisticated microscopy technique that for the first time captures the detailed movement of subcellular organelles over large areas within plant cells1. The technique reveals how the distribution of organelles involved in the maintenance and growth of the cell membrane changes with the growth cycle.

Plant cells control their growth and proliferation in response to environmental cues. They achieve this by switching between a stationary phase and a growth phase. This switch in phase is accompanied by changes in the distribution and abundance of the organelles within each cell, but the exact changes are not well understood.

Toyooka and his team wanted to capture images of organelles in the different cell phases to better understand the changes that occur. Conventional approaches, however, do not allow the whole picture to be captured at once or lack the resolution required to reveal structural detail. “We can observe the movement and distribution of organelles by fluorescent microscopy techniques, but such techniques cannot resolve the structures of the organelles themselves,” explains Toyooka. Another applicable technique, transmission electron microscopy (TEM), provides the resolution needed to observe this structural detail but can normally only be used to capture images of small areas.

Toyooka and his team developed a new way of using TEM to visualize larger areas. First, they prepared cell samples using a high-pressure freezing technique to preserve the dynamic organelle structure. They then used an auto-acquisition system to capture thousands of overlapping TEM images, and finally merged the images to create high-resolution maps of wide cell areas.

The images revealed dramatic changes in the distribution, shape and structure of specific organelles involved in transporting proteins and lipids to the cell membrane (Fig. 1). This transport process is required for growth, and when the cells were not growing, these organelles became smaller and fewer in number. The findings provide insight into exactly how the changes help the cells adapt to their environment.

“In nutrient-rich conditions, plants synthesize many proteins and lipids to divide and grow quickly,” says Toyooka. “Under nutrient-low conditions, they stop this synthesis and elongate their bodies to digest unnecessary organelles.”

The team is now constructing a zoomable TEM image of plant cells, and plans to produce electron microscope atlases of plant organs, tissues and cells to show how the structure of organelles change under various conditions.