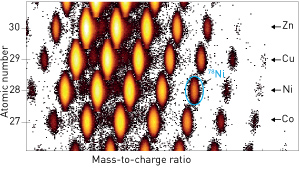 The stability of atoms can vary considerably from one element to the next, and also between isotopes of the same element (whose nuclei contain the same number of protons but different numbers of neutrons). While many isotopes are unstable and rapidly undergo radioactive decay, certain ‘magic’ isotopes show exceptional stability. Clarifying the properties of these stable isotopes is essential for understanding how the chemical elements formed in the early Universe. In an important step toward verifying various theoretical models, Shunji Nishimura and colleagues from the RIKEN Nishina Center for Accelerator-Based Science have now verified the magic numbers of an enigmatic ‘doubly magic’ isotope, nickel-781.

The magic numbers for isotope stability are well established for isotopes with similar numbers of protons and neutrons. The seven most widely recognized magic numbers are 2, 8, 20, 28, 50, 82 and 126; these correspond to the number of particles needed to completely fill proton or neutron ‘shells’ in the nucleus. The nickel-78 (78Ni) isotope contains 28 protons and 50 neutrons, making it doubly magic according to this series. However, isotopes with such a large excess of neutrons compared to protons are predicted to have different magic numbers, and some theoretical models even suggest that 78Ni is not magic at all. Consequently, much attention has been paid to the magic properties of 78Ni in efforts to verify theoretical models of nuclear physics and the formation of heavy elements.

Settling the issue of the magic stability of 78Ni experimentally, however, has proved challenging. “Many experiments have been carried out to identify systematic trends in nuclear properties near 78Ni,” says Nishimura. “Yet there has been no clear evidence on whether 78Ni is a double-magic nuclei due to the extremely low production yield of this isotope.”

Fortunately, RIKEN’s Radioactive Isotope Beam Factory is capable of generating high yields of exotic and rare isotopes like 78Ni (Fig. 1). Using this facility, in combination with the newly developed WAS3ABi detector, the research team was able to perform measurements of 78Ni decay with unprecedented precision. The experiments confirmed the doubly magic status of 78Ni, providing valuable insights into the behavior of exotic nuclei with large neutron excess. Such neutron-rich nuclei play an important role in the production of elements heavier than the most stable element iron, such as gold and uranium. “We hope to solve one of the biggest mysteries of this century—where and how were the heavy elements created in the Universe?” explains Nishimura.