Waking up the visual system

In rodents awakened from anesthesia, two populations of neurons in the visual cortex change the way they fire in response to visual stimuli 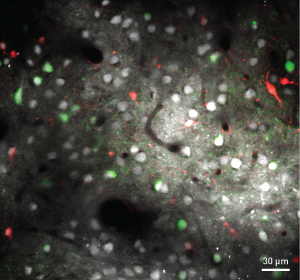 Figure 1: Two-photon image of the three types of cells in the visual cortex of a rat. Neuronal activity is measured via changes in fluorescence intensity. Green cells are inhibitory neurons, white cells are excitatory neurons, and red cells are astrocytes. Reproduced, with permission from Ref. 1 © 2014 R. Kimura M et al.

The ways that neurons in the brain respond to a given stimulus depends on whether an organism is asleep, drowsy, awake, paying careful attention or ignoring the stimulus. However, while the properties of neural circuits in the visual cortex are well known, the mechanisms responsible for the different patterns of activity in the awake and drowsy states remain poorly understood. A team of researchers led by Tadaharu Tsumoto from the RIKEN Brain Science Institute has observed the changes in activity that occur in rodents on waking from anesthesia1.

The research team used a technique called two-photon functional calcium imaging to observe the activity of cells in the visual cortex of rats while they are anesthetized and exposed to a visual stimulus of an image moving across a screen. Using rats with inhibitory neurons labeled with a green fluorescent protein, the researchers were able to measure the activity separately in populations of inhibitory and excitatory neurons (Fig. 1). The neuronal activity in response to visual stimulation under anesthesia was recorded, and then the rats were allowed to wake and the change in activity of the two populations of neurons was observed.

Tsumoto’s team found that inhibitory neurons responded more reliably and with stronger activity to visual stimuli in the awake state than in the anesthetized state. The response of the excitatory neurons had a shorter decay time in the awake state, which means that their activity was more tightly linked to the presentation of the visual stimulus than when the animal was under the influence of anesthesia.

These changes that occur during wakefulness allow neurons in the visual cortex to respond more reliably to visual stimuli in their environment. “If animals are awakened from the drowsy state by howls or footsteps of enemies, the sensitivity or resolution of moving visual stimuli will increase so that they can more effectively judge how fast and from which location the enemies are coming,” explains Tsumoto.