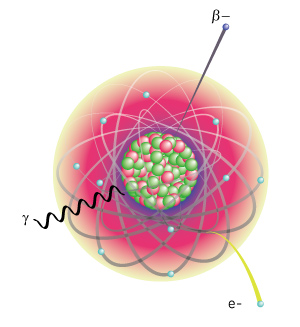 The stability of an atomic nucleus strongly depends on the number of protons and neutrons it contains. Some nuclei can, in principle, live forever, whereas others last only a fraction of a second before decaying into different nuclei. Hiroshi Watanabe from the RIKEN Nishina Center for Accelerator-Based Science and a long list of co-workers from Japan and around the world have now identified a long-lived metastable state in a neutron-rich nucleus that helps build a better picture of the forces that hold matter together1.

In the 1940s and 50s, nuclear physicists developed a model to understand nuclear stability in which the nucleus is viewed as a series of shells. Each shell accommodates a specific number of protons or neutrons, and nuclei in which all the shells are full are expected to be highly stable. This simple model is supported by the experimental observation that nuclei with 2, 8, 20, 28, 50 or 82 protons or neutrons have long lifetimes. These have become known as the ‘magic numbers’ of nuclei stability.

“We now understand that this shell structure and the resultant magic numbers arise because the protons and neutrons occupy discrete, or quantized, energy levels in the nucleus,” explains Watanabe. Yet many questions remain as to why some magic numbers are unstable in some nuclei, and how this shell structure evolves in nuclei with a large imbalance between protons and neutrons.

To search for some answers, the researchers investigated the structure of the palladium-126 nucleus, which comprises 46 protons and 80 neutrons. Palladium-126 is important for building a better understanding of nuclear shell structure because it has two ‘holes’ in the neutron shell, which can magnify the effect of even a tiny divergence from the neutron magic number of 82.

Using RIKEN’s Radioactive Isotope Beam Factory, the researchers produced a filtered beam of palladium-126 nuclei and observed their decay (Fig. 1) using the Euroball–RIKEN Cluster Array (EURICA) detector system. The results revealed a relatively long-lived excited state, known as an isomer, with a lifetime approximately half that of the ground state of palladium-126—the first time that anyone had observed this isomeric state in palladium-126.

“This excited state is surprising because all similar known isomers in this nuclear region survive for a much shorter time,” says Watanabe. “Hopefully, we will be able to explore further neutron-rich nuclei and see if similar long-lived isomers appear, which could serve as a sensitive probe of the nuclear shells and their evolution.”