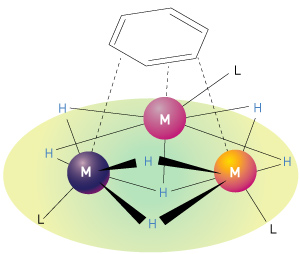 Organic chemicals built on skeletons of bonded carbon atoms provide the chemical foundation of life and most of our pharmaceuticals, polymers and fuels. Synthetic chemists are very interested in finding simple and controlled ways to break and reform the bonds between carbon atoms, but these bonds are quite stable and are therefore unreactive under many reaction conditions. Many of the methods that can be used to break these bonds require high temperatures and are relatively non-selective, generating a mixture of products. These difficulties are particularly pronounced for benzene, an organic compound consisting of six hydrogen and six carbon atoms (C6H6) that is the best-known example of the vast range of ring-like ‘aromatic’ compounds.

Selective cleavage of the carbon–carbon bonds of some aromatic compounds has been shown to be possible under particular conditions using transition metals, but whether this more efficient cleavage process is possible for benzene under mild conditions was unknown.

In a discovery that promises to make this carbon–carbon bond manipulation much easier and more efficient, Zhaomin Hou, Shaowei Hu and Takanori Shima from the Advanced Catalysis Research Group at the RIKEN Center for Sustainable Resource Science have developed a technique that allows carbon–carbon bonds in benzene to be broken at low temperature in a highly selective manner1. “This is the first well-defined molecular system that enables carbon–carbon bond cleavage and skeleton rearrangement of benzene at room temperature,” says Hou.

Benzene is found in crude oil and is a hazardous and carcinogenic substance as well as a significant pollutant. Other aromatic compounds are widespread in the natural world, forming important parts of many of the key molecules of life. Aromatic compounds were initially given that name due to the distinctive aroma of those first discovered, including benzene, but many are actually odorless. The true link between all of the aromatics is their unique electronic structure. In a simple representation, this structure looks as if it comprises alternating single and double carbon–carbon bonds arranged in a cyclic manner. The truth, however, is more subtle and interesting: each carbon atom in an aromatic ring contains one free electron, and these electrons are distributed around the ring to form a unique circular electron arrangement that bonds the carbon atoms together.

Figure 2: An example of the rearrangements of benzene achieved when combined with the trinuclear titanium heptahydride. Reproduced, with permission, from Ref. 1 © 2014 S. Hu et al.

Hou’s discovery of an easy and selective way to break carbon–carbon bonds in benzene arose out of a long-standing interest in catalysts consisting of complexes of rare-earth metals combined with hydrogen atoms and other chemical groups. Hou had specifically been looking at ‘multinuclear’ hydrides, so called because their molecules contain several metal atoms (Fig. 1). In previous work, he used these complexes to activate small molecules such as carbon monoxide, carbon dioxide, hydrogen and nitrogen. Hou and his colleagues were surprised by the unusually high reactivity of a specific trinuclear titanium heptahydride complex containing three titanium atoms and seven hydrogen atoms together with three cyclopentadienyl groups (five-membered carbon rings). This observation prompted the researchers to investigate whether the titanium heptahydride could activate other chemically inactive molecules, including benzene.

Their experiments involved preparation of a solution of the titanium heptahydride in benzene and letting it stand at room temperature in an unreactive argon atmosphere. After a few days, they found that dark green crystals had formed, which x-ray diffraction analysis revealed to be a new complex containing a cyclopentenyl ring of five linked carbon atoms—a complex formed by breaking a carbon–carbon bond of the benzene ring and forming a new, single carbon–carbon bond to attach a methyl (CH3) group to a five-membered carbon ring (Fig. 2). The process also involved the addition of hydrogen atoms, yielding a product that was no longer aromatic. The rearrangement reaction was highly specific, producing the new structure, called methylcyclopentenyl, with high conversion efficiency.

Hou’s team was keen to learn as much as possible about the precise mechanism by which this surprising rearrangement reaction was achieved, in part because this knowledge might reveal strategies for rearranging the bonds of other aromatic molecules. They therefore repeated the reaction at a lower temperature of 10 °C. These conditions led to the observation of several intermediate compounds. These studies gave the researchers good insight into precisely how the various bonds were broken and new bonds formed during the transformation. 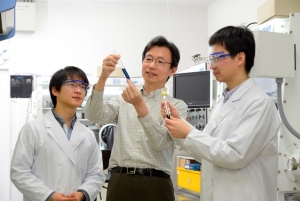 “Our results suggest that multinuclear titanium hydrides could serve as a unique platform for the activation of aromatic molecules,” says Hou. He has already achieved similar results with the aromatic compound toluene and is moving on to other aromatics. He points out that the reactivity of the complexes could be fine-tuned by changing the combination of metals and the ligand groups attached to the metals. This work may therefore open up new possibilities for exploiting the chemical potential of benzene and other aromatic compounds.

The research also sheds light on the ways in which related industrial catalysts may work, and could even reveal aspects of the mechanisms by which enzymes transform aromatic compounds in nature. This work with benzene significantly extends the earlier work by Hou’s Advanced Catalysis Research Group, which is developing new generations of catalysts for more efficient, selective chemical transformations. The group is also focusing on catalysts that can minimize the use of rare and expensive metals and that can enable carbon dioxide to be used as a raw material for the synthesis of useful chemicals.

Zhaomin Hou graduated from the China University of Petroleum in 1982 and obtained his PhD in chemistry in 1989 from Kyushu University in Japan. After postdoctoral training at RIKEN and the University of Windsor in Canada, he joined RIKEN as a research scientist in 1993. Hou was promoted to senior scientist in 1997 and chief scientist in 2002. From 2013, he has been concurrently working as deputy center director of the RIKEN Center for Sustainable Resource Science (CSRS) and group director of the Advanced Catalysis Research Group at the CSRS. His research interests include the activation and utilization of small molecules such as nitrogen gas and carbon dioxide and the development of more efficient, selective catalysts for synthesizing functional molecules and polymers.