Memories get the emotional switch 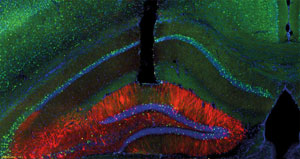 Figure 1: A magnified image of a mouse brain showing memory cells (red) that can be turned ‘on’ and ‘off’ using light delivered by a fiber optic cable (black). © 2014 Susumu Tonegawa, RIKEN–MIT Center for Neural Circuit Genetics

Memories of experiences are encoded in the brain along with contextual and emotional information such as where the experience took place and whether it was positive or negative. This allows for the formation of memory associations that might assist in survival. Just how this positive and negative encoding occurs, however, has remained unclear.

Susumu Tonegawa and colleagues from the RIKEN–MIT Center for Neural Circuit Genetics have now discovered that neurons in the hippocampus region of the brain can be artificially switched to encode memories as either positive or negative regardless of the original experience1.

Tonegawa’s research team used genetic techniques to mark neurons in the dorsal dentate gyrus region of the hippocampus and the basolateral complex of the amygdala (BLA) in male mice. Memories are encoded in both these regions as specific groups of activated cells called ‘engrams’, but each region encodes the memory in slightly different ways: the BLA encodes positive and negative memory ‘valence’, while the dorsal dentate gyrus encodes contextual information such as emotion.

The genetic labeling, which involved using a light-sensitive ion channel called channelrhodopsin, was activated by the formation of either a positive memory, in this case exposure to females, or a negative memory associated with a foot shock. The cells that expressed this channel could be subsequently activated by exposure to light (Fig. 1); doing so induced aversive responses in mice that had experienced foot shocks, and appetitive responses in those that had experienced female interactions.

The researchers then used light to activate the hippocampal or BLA neurons that had been labeled during the formation of a positive memory while exposing the mice to foot shocks. The next time the animals were tested, light activation of those hippocampal neurons that had initially induced appetitive responses instead led the mice to exhibit aversive responses. However, BLA neurons could not be switched in this way, indicating that only neurons in the hippocampus have plasticity in their encoding of positive or negative memories.

The valence of hippocampal neurons, the researchers found, could be switched from both good to bad and bad to good using this technique, with the switch attributed to a change in the strength of connections between the hippocampal and BLA neurons of each engram.

The findings provide new insight into how memories can be altered after they are formed. The possibility of inducing similar changes to memory valence in humans could also offer hope of a treatment for those suffering from conditions such as post-traumatic stress disorder.