A newly identified subpopulation of innate immune cells can be ‘primed’ to provide a rapid response against the emergence of future threats, including tumor growth 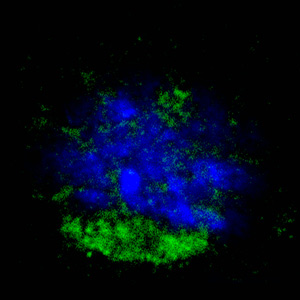 The adaptive immune system has the ability to ‘remember’ a given pathogen or cancer cell by producing memory T cells that can mount a rapid counterattack against future threats. The innate immune system, on the other hand, is seen as more of a blunt instrument, only capable of launching a broad defensive response against potential invaders. A research team led by Shin-Ichiro Fujii and colleagues from the RIKEN Center for Integrative Medical Sciences has now identified a population of innate immune cells that display the attributes of memory cells and which may help keep tumor growth at bay1.

Natural killer T (NKT) cells are recognized components of the innate immune system that are involved in the rapid response to virally infected cells and tumor formation. Recent studies, however, have hinted that after infection, some of these cells have many of the characteristics of memory cells. Spurred by clinical observations during NKT-cell therapy, Fujii’s team began investigating a subtype called invariant natural killer T (iNKT) cells.

“We have found that lung cancer patients treated with dendritic cells and a lipid called α-galactosylceramide, which together modulate iNKT-cell activity, showed a longer median survival time, but we did not know the mechanism,” says Fujii. Their research revealed that this activation specifically promotes the proliferation of iNKT cells expressing a particular surface protein known as killer cell lectin-like receptor subfamily G, member 1 (KLRG1), which is generally found on the surface of NK cells, adaptive immune cells, and memory T cells (Fig. 1).

Examining the memory properties of these iNKT cells, Fujii’s group learned that mice treated with dendritic cells and α-galactosylceramide maintain reservoirs of KLRG1-expressing iNKT cells in their lungs for up to nine months after treatment. Like memory T cells, these innate cells remain poised for a quick response and generated a vigorous immune reaction against a second dose of α-galactosylceramide injected several weeks or even months after the initial treatment. Additional experiments showed that the KLRG1-expressing iNKT cells produced by mice inoculated with dendritic cells and α-galactosylceramide could sharply reduce metastatic growth after injection with melanoma cells.

These findings reveal an additional layer of complexity for the innate immune system. “We have determined that the innate immune system can undergo a memory response,” says Fujii. His group is now exploring whether the same memory-cell population can be identified and selectively stimulated in humans, offering a potential means for bolstering the protective response against cancer and other diseases.