Algae dance in the spotlight 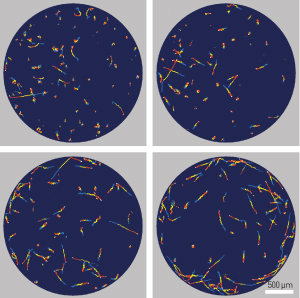 Figure 1: Trace images of the motion of Euglena gracilis microalgae for a period of 4.5 seconds, color coded to show swimming direction with a time order of blue, yellow, red then white. Reproduced, with permission, from Ref. 1 © 2014 K. Ozasa et al.

Photosynthetic microorganisms such as single-cell algae are currently undergoing intensive research for their potential to produce oil and other products from biomass as a means of curbing the use of fossil fuels. Understanding and controlling the metabolic state of these organisms is crucial to optimizing growth conditions for eventual industrialization of algal-based technologies. Kazunari Ozasa and colleagues from the RIKEN Bioengineering Laboratory have now developed a simple technique for investigating the metabolic state of the microalga Euglena gracilis1.

Euglena is a motile alga that is used in many studies into the commercial potential of these microorganisms. It is adapted for moderate light conditions—weak light limits its photosynthesis, while strong light causes oxidative stress. Under acceptable moderate light, the single-celled Euglena swims in a straight line. If it encounters weak light, a light-seeking photophilic response causes the cell to turn back toward the light. If it encounters strong light, however, a light-avoiding photophobic response is triggered and the cell turns away from the light. Failure to find light of suitable intensity causes the cell to turn continuously.

Exploiting this behavior, Ozasa’s team developed an innovative ‘trace momentum’ method using a microfluidic device that allows the movement of single cells to be followed under different modes of illumination (Fig. 1). They found that Euglena cells occur in three distinct types—A, B and C—corresponding to three different metabolic states.

On exposing the cells to strong blue light and then switching the light off, type A cells transitioned smoothly from tumbling to swimming in a straight line, type B cells ‘froze’ motionless for a few seconds before starting to swim in a straight line, and type C cells became completely motionless. The researchers then compared this behavior to that after red light illumination, under which photosynthesis is more efficient. Their analysis concluded that the temporary freezing of type B cells under blue light is due to a short-term deficiency in a metabolic substance that appears to be generated more efficiently under red light.

Although the photoreceptor molecule responsible for the photophobic response of Euglena is well understood, the metabolic processes that mediate the response are still unclear. “We now hope to identify the metabolic substance responsible for the anti-freezing capability,” says Ozasa. “We also want to see if the three types of cell are essential for Euglena to survive in severe environments, and to determine which type is most effective for the production of oil components or amino acids.”