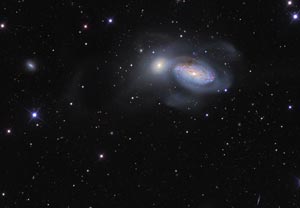 Most galaxies are assumed to have at their heart a supermassive black hole that draws in vast amounts of surrounding matter. As this matter is sucked in, it releases energy in the form of intense x-ray emissions that in some cases can be more intense than the emission from all the stars in the galaxy combined.

Through detailed study of the x-ray emissions from the center of the galaxy known as NGC 3227, Hirofumi Noda from the RIKEN Nishina Center for Accelerator-Based Science and colleagues have now revealed the multiple processes responsible for these emissions1. “Our results show the presence of multiple mechanisms of energy conversion of matter near a central black hole,” explains Noda.

The x-ray emissions from the centers of galaxies provide valuable information on the properties of their central black holes, as well as the surrounding matter and ultimately the history of galaxies in general. However, it can be difficult to separate the original radiation emitted by matter close to the black hole from secondary processes caused by other matter around the black hole. The typical spectral analysis applied to images of galactic centers is unable to clearly distinguish the different emission processes. Noda and his colleagues instead studied the change in emissions over time. By analyzing the different radiation patterns and their correlations, they were able to separate primary emission from the emission spectra arising from secondary processes such as reflection.

Using this approach and wide-range x-ray data obtained over the course of a few weeks by the Japanese research satellite Suzaku, the team identified three distinct spectral components from NGC 3227—a typical type I Seyfert galaxy that lies about 80 million light years from Earth (Fig. 1). The intensity of the source varied by almost an order of magnitude over the course of the observations, and by analyzing these variations, the researchers could correlate the spectral components with three different mass accretion flows into the galaxy’s black hole.

Noda believes that studying the ultraviolet emissions from matter at a greater distance from the black hole could also provide further insight into the detailed physics of supermassive black holes. X-ray emissions, however, are still expected to reveal much more information if the spectral resolution of observations can be improved. “The soon-to-be-launched Japanese x-ray satellite ASTRO-H will achieve an unprecedentedly fine energy resolution, which will enable us to understand the properties of black holes, their evolution and their interaction with the galaxy around them.”