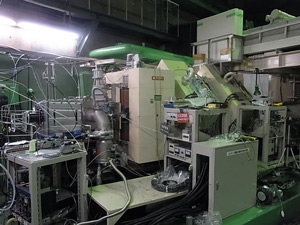 An international research collaboration involving scientists from the RIKEN Nishina Center for Accelerator-Based Science has for the first time synthesized a carbonyl complex with a super-heavy element at its core1. The technique used to create this exotic molecule, seaborgium hexacarbonyl, promises to advance our knowledge of the chemistry of unstable elements located at the end of the periodic table.

Seaborgium is a synthetic element that can only be produced by nuclear fusion in high-energy particle accelerators. This element has 106 protons in its bloated nucleus, which forces some of the atom’s electrons to orbit at around 80% of the speed of light. Einstein’s special theory of relativity predicts that electrons become heavier at these velocities, which affects how they form chemical bonds. Studying this chemical bonding behavior, however, is a daunting task. Inorganic compounds of seaborgium have been produced in the past, but the complexing agents are easily destroyed by the heavy ion beam and detection of the compounds is complicated by the creation of byproducts.

Researchers at the RIKEN heavy ion linear accelerator (RILAC), in collaboration with co-workers from around the world, have now developed an innovative technique for creating and separating super-heavy elements, and also for studying their chemistry. “Using this technique, we have been able to create an organometallic compound of seaborgium, which has never before been achieved for super-heavy elements,” says Hiromitsu Haba, head of the RIKEN Radioisotope Applications Team involved in the research.

The novel seaborgium hexacarbonyl complex was created at the RILAC facility by firing a beam of neon ions at a rotating curium target to form radioactive atoms of seaborgium that decayed in a matter of seconds. These atoms were quickly separated from the main ion beam and unwanted byproducts using RIKEN’s Gas-filled Recoil Ion Separator (GARIS), and then mixed with carbon monoxide gas as the source of the carbonyl ligand. The products of this reaction then passed over a series of silicon detectors, which identified a grand total of 18 seaborgium atoms.

The team now hopes to use GARIS (Fig. 1) to study the chemistry of other super-heavy elements, such as hassium (element 108), which may also be affected by strong relativistic effects.