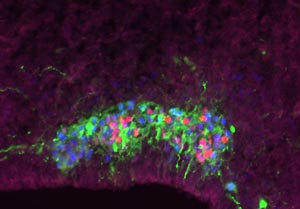 The cerebral cortex, which controls higher processes such as perception, thought and cognition, is the most complex structure in the mammalian central nervous system. Although much is known about the intricate structure of this brain region, the processes governing its formation remain uncertain. Research led by Carina Hanashima from the RIKEN Center for Developmental Biology has now uncovered how feedback between cells, as well as molecular factors, helps shape cortical development during mouse embryogenesis1.

The cortex is made up of layers of interconnecting cells that are produced in a particular order from progenitor cells. The relatively cell-sparse outer layer is formed first, then the dense deep layer, and finally the tightly packed upper layer. Hanashima and her colleagues were interested to discover exactly how the various layers form, so they created a mouse model that enabled them to control the expression of a particular protein, Foxg1, known to be involved in cortical development.

The Foxg1 gene, if switched on toward the end of embryogenesis after the outer layer of neurons has formed, triggers the production of deep-layer neurons, followed by upper-layer neurons (Fig. 1). The researchers found that it does this by repressing the activity of another gene, called Tbr1, in the outer-layer neurons.

Genetics, however, is not the only factor that influences the development of this complicated laminar structure. In a separate experiment, the researchers let natural embryonic development run its course until the deep-layer neurons had formed, after which they selectively killed off these cells. At a point in time when the production of deep-layer cells would normally have ceased, it instead continued. The absence of the ‘production stop’ signal from deep-layer neurons caused the progenitor cells to continue to make deep-layer neurons. “Before this study, there was no evidence for any feedback between post-mitotic neurons and progenitors,” says Hanashima, “but we’ve shown that the two cell types do communicate.”

Extrinsic, cellular factors as well as intrinsic, genetic cues help to guide cortical development. This mechanism allows the developing brain to balance the various different cell types found in the neocortex: it gives the brain flexibility to adjust if too few of one cell type are produced. Although the numbers of cells and embryonic and gestational periods differ significantly between mice and humans, both species are endowed with almost identical genetic toolkits, and consequently the researchers think it is likely that the human neocortex is generated in much the same way.