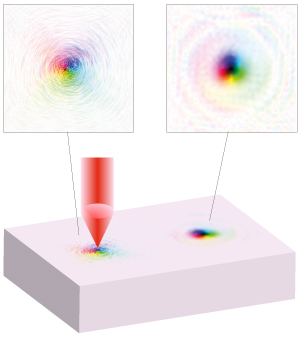 A simulation study by researchers from the RIKEN Center for Emergent Matter Science has demonstrated the feasibility of using lasers to create and manipulate nanoscale magnetic vortices1. The ability to create and control these ‘skyrmions’ could lead to the development of skyrmion-based information storage devices.

The information we consume and work with is encoded in binary form (as ‘1’s or ‘0’s) by switching the characteristics of memory media between two states. As we approach the performance and capacity limits of conventional memory media, researchers are looking toward exotic physics to develop the next generation of magnetic memories.

One such exotic phenomenon is the skyrmion—a stable, nanoscale whirlpool-like magnetic feature characterized by a constantly rotating magnetic moment. Theoretically, the presence or absence of a skyrmion at any location in a magnetic medium could be used to represent the binary states needed for information storage. However, researchers have found it challenging to reliably create and annihilate skyrmions experimentally due to the difficulty in probing the mechanics of these processes in any detail. The challenge lies in the incredibly short timescale of these processes, which at just a tenth of a nanosecond is up to billion times shorter than the timescale observable under the Lorentz microscope used to measure magnetic properties.

The study authors, Wataru Koshibae and Naoto Nagaosa, sought a solution to this problem by constructing a computational model that simulates the heating of a ferromagnetic material with pinpoint lasers (Fig. 1). This localized heating creates both skyrmions and ‘antiskyrmions’. The simulations, based on known physics for these systems, showed that the characteristics of skyrmions are heavily dependent on the intensity and spot size of the laser. Further, by manipulating these two parameters, it is possible to control skyrmion characteristics such as creation time and size.

“Heat leads to random motion of magnetic spins,” explains Nagaosa. “We therefore found it surprising that local heating created a topologically nontrivial ordered object, let alone composite structures of skyrmions and antiskyrmions” The issue of control is what differentiates these structures.

Nagaosa believes that as skyrmions are quite stable, these nanoscale features could conceivably be used as an information carrier if a reliable means of creating them at will can be achieved. Koshibae and Nagaosa’s work could therefore form the basis of the development of state-of-the-art memory devices. The work also provides valuable information on the creation of topological particles, which is crucial for advancing knowledge in many other areas of physics.