Lining up for molecular memory devices 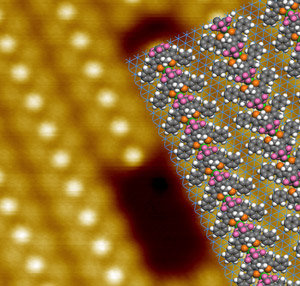 Figure 1: Scanning tunneling microscopy image (background) of the ordered array of diarylethene derivative molecules. A schematic of the molecular structure is shown in the foreground. Reproduced, with permission, from ref. 1 © 2014 Wiley

A way to use weak molecular bonding interactions to create well-ordered and stable metal–organic monolayers with optoelectronic properties has been found by researchers from the RIKEN Surface and Interface Science Laboratory1. The development could form the basis for the scalable fabrication of molecular optoelectronic devices.

A variety of emerging technologies are being investigated as potential replacements or enhancements of the electrical-charge-based electronics that lie at the heart of all electronic devices. Utilizing interactions between light and charge—referred to as optoelectronics—is of particular interest to researchers and engineers. Organic molecules that change state reversibly in response to pulses of light could, for example, be used to build versatile optoelectronic memory devices with ultrahigh storage capacities.

The RIKEN team, led by Tomoko Shimizu and Yousoo Kim, developed a scheme for laying ordered monolayers of diarylethene derivatives on a copper substrate. Diarylethenes have well-established photochromic properties, undergoing reversible color changes when irradiated with light. Crucially, the diarylethene derivative used by Shimizu and Kim’s team has an electric dipole, meaning that the distribution of electric charge in the molecule causes one end to be slightly negative and the other to be slightly positive.

Application of a chemical ‘annealing’ process promotes a further subtle rearrangement of each molecule into a more stable configuration on the metal surface that reinforces the conductive ‘on’ state. The use of a copper substrate with a particular crystal arrangement, known as Cu(111), also facilitates precise arrangement of the organic molecules.