A genetic twist can lead to infertility 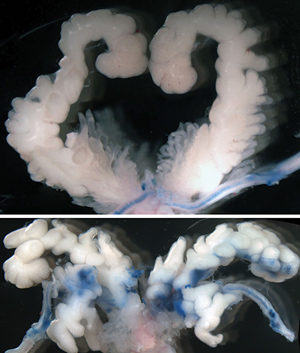 Figure 1: In male mice with the β-cateninC429S mutation, the sperm pathway (blue) is bifurcated (bottom). The same pathway in a healthy mouse is shown at the top.Reproduced from Ref. 1 and licensed under CC BY 4.0 © 2014 T. Murata et al.

Researchers at the RIKEN BioResource Center have discovered that a single mutation in a gene involved in embryonic development can cause sexual organ abnormalities in mice1. “This mutation may also be responsible for at least some cases of infertility in humans,” says Takuya Murata, who led the study.

When Murata joined the team of RIKEN geneticist Yoichi Gondo, he originally set out to study a signaling protein called β-catenin in the hope of discovering previously unknown biological functions of this essential developmental regulator. As an essential component of the Wnt/β-catenin signaling pathway, β-catenin is critical for embryonic development. Faults in this pathway can lead to development problems and disease, even cancer.

By screening RIKEN’s mutant mouse library, Murata and co-workers identified several mutant mice with single alterations in the Ctnnb1 gene that encodes the β-catenin protein. One of these mouse strains, they discovered, could not produce offspring by natural mating, even though the sperm and eggs of a mating pair of mice of this strain gave rise to healthy progeny when combined via in vitro fertilization.

Closer inspection of mice of this strain, called β-cateninC429S, revealed that the male testes and female ovaries were normal. Other parts of the sexual anatomy, however, harbored specific and unusual malformations. In the males, the seminal vesicles were abnormally duplicated, resulting in detoured sperm transportation routes (Fig. 1). In the females, the normal opening of the vagina was absent—a major obstacle to natural conception. These malformations prevented successful conception from occurring despite normal egg and sperm production.

These very particular results were a surprise given the broad influence of this signaling protein. “Nobody ever anticipated that β-catenin, a ubiquitously expressed protein, would be a cause of such a specific effect on the organogenesis of the internal genitalia while still leaving oocytes and sperm normal,” says Gondo.

As the human form of β-catenin is identical to the protein found in mice, this mouse strain could serve as a valuable model to study human infertility—a problem that affects an estimated 50 million couples worldwide. Although many people struggle to conceive because of irregular sperm or egg cells, others are unable to have children because of structural problems in the reproductive organs.

The β-cateninC429S mice are now available to the research community through the RIKEN BioResource Center. Gondo and Murata are also seeking collaborators to study whether the same mutation is found in human patients who experience infertility problems.