Shining a gentle light on photosynthesis 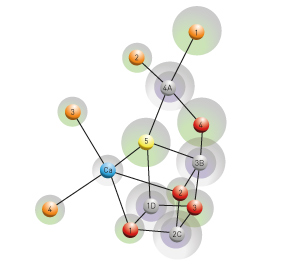 A more accurate view of the structure of the oxygen-evolving complex that splits water during photosynthesis is now in hand thanks to a study involving researchers from the RIKEN SPring-8 Center, Okayama University and the Japan Science and Technology Agency1. The new model of natural photosynthesis provides a blueprint for synthesizing water-splitting catalysts that mimic this natural process.

Natural photosynthesis starts in an elaborate pigment–protein complex known as photosystem II, which is found in cellular membranes of higher plants, algae and cyanobacteria. This complex catalyzes the splitting of water into oxygen, hydrogen ions and electrons. In principle, this reaction is a solar-powered fuel cycle, with the only end product being the water formed when the hydrogen and oxygen are recombined to release energy.

“The bottleneck in producing sustainable and clean fuel energy from sunlight and water is the availability of efficient artificial catalysts for water splitting,” says Hideo Ago from the RIKEN research team. This explains why there is such intense interest in understanding exactly how nature splits water so efficiently.

The structure of photosystem II has been examined before at very high resolution by x-ray diffraction crystallography, and detailed models of the system have been obtained. However, the high-energy x-rays used in such analyses tend to damage the structure of the complex, resulting in some discrepancy among findings and a lack of clarity for certain atomic structures.

The research team avoided the problem of radiation damage by using a series of ultrashort femtosecond x-ray pulses generated by RIKEN’s ‘SACLA’ x-ray free-electron laser facility. The short pulses prevented structural damage and the more accurate results allowed the researchers to identify several new features of the catalytic center of photosystem II from the bacterium Thermosynechococcus vulcanus. The results indicate that catalysis occurs in a cluster of manganese and oxygen atoms with one calcium atom (Fig. 1). With more accurate measurement of the distances between the atoms, the researchers revealed that one of the oxygen atoms may actually form part of a hydroxide ion and could be derived from a split water molecule.

“We solved the structure in the ‘dark-stable’ state before the water-splitting reaction,” explains Jian-Ren Shen, one of the researchers from Okayama University. “We now hope to use the same method with light illumination to follow the process through the reaction cycle.” Such a study would provide a complete picture of how the biological photosynthesis reaction proceeds and greatly assist efforts to use the process in a fuel cycle.