A new crop on the web 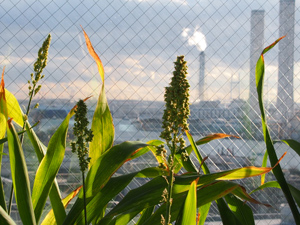 A new online resource prepared by scientists at the RIKEN Center for Sustainable Resource Science provides vital baseline information on the staple crop sorghum for plant breeders and researchers1. Sorghum bicolor, called morokoshi in Japanese (Fig. 1), is the fifth-most widely grown cereal in the world. Particularly suited to hot, dry climates, it is a staple food but also a source of cooking fuel and animal forage for millions of people in semi-arid environments where other crops, such as maize or sugar cane, would struggle. The crop also accumulates high levels of sugar and starch, making it a potential resource for bioethanol production.

The research, led by Minami Matsui, Yuko Makita and Setsuko Shimada involved collection of the full-length sequence of sorghum complementary DNA for eight developmental stages of the plant. The data are now stored in RIKEN’s Morokoshi sorghum transcriptome database, which can be publicly searched by gene or gene function. Similar databases for other species, such as the model plant Arabidopsis, have proved popular and stimulated new research.

“It's very important to users that they can access this information from a single website,” says Makita. The database also allows users to compare sorghum genes with their counterparts in other species such as Arabidopsis, rice, maize and poplar.

The completeness of the transcriptome makes it possible to accurately annotate the likely role of each gene. The team also identified over 20,000 putative ‘transcription start sites’, marking the beginning of genes. These could be used to locate nearby regulatory DNA regions, which can switch genes on or off.

The researchers then used their data to generate profiles showing gene activity in sorghum stems, spikelets and seeds, which allowed them to isolate genes involved in starch accumulation—a key process in producing sorghum’s nutrient-rich seeds. They also produced profiles showing the times and tissues in which individual genes are active, which will assist in the identification of genes with similar patterns of regulation and function.

Matsui’s team hopes that their database can be used to identify genes responsible for sorghum’s sugar metabolism and starch biosynthesis. This information could then be used to breed better varieties of sorghum and to engineer crops with higher levels of sugar production and starch accumulation under waterlogged conditions. “It’s difficult to do this kind of research in maize, for instance, because its genome is so big,” notes Makita. “So our sorghum data can assist maize researchers too.”