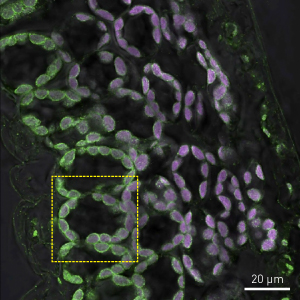 Figure 1: The ascorbate transporter AtPHT4;4 (green) occurs in the outer membrane of the chloroplast. Reproduced from Ref. 1 and licensed under CC BY 4.0 © 2015 T. Miyaji et al.

Plants’ resistance to light stress is facilitated by a transporter protein found in the membrane of the organelle responsible for photosynthesis, researchers from RIKEN and Okayama University have found1. The finding provides a new route for engineering crops with improved stress resistance.

Photosynthesis in plants involves the absorption of light energy to split water into oxygen and hydrogen. This process produces potentially damaging reactive oxygen species as a byproduct of photosynthesis. Under intense sunlight, the photosynthetic machinery dissipates excess light energy as heat which can cause the system to shut down, resulting in impaired growth.

Ascorbate, otherwise known as vitamin C, is an essential antioxidant and coenzyme for many different metabolic reactions. In plants it serves a critical function in neutralizing reactive oxygen species and augmenting the activity of a cofactor that dissipates excess light energy. It is produced in the cell’s specialized energy factory called the mitochondria, from where it is released into the cell’s cytosolic fluid. To protect plants against the stress of intense sunlight, however, the ascorbate needs to be transported to the chloroplasts—the subunits of the plant cell where photosynthesis occurs.

The research team, led by Takashi Kuromori from the RIKEN Center for Sustainable Resource Science and Takaaki Miyaji from Okayama University, set out to find the protein that helps shuttle ascorbate from the mitochondria into the chloroplast, focusing on a family of phosphate transporters called PHT4 proteins that are strongly expressed in plant leaves.

Working with the model plant Arabidopsis thaliana, also known as thale cress, the team took four related genes that encode PHT4 transporters and expressed the DNA in a bacterial model. They then created artificial membranes to mimic the structure of chloroplasts. In this way, they found that only artificial membranes with the ‘AtPHT4;4’ protein showed the movement of ascorbate.

The researchers then analyzed the expression and localization patterns of the transport protein in Arabidopsis leaves that lacked a functional version of the AtPHT4;4 transporter. In these plants, the cells were unable to efficiently dissipate the large amounts of heat produced during photosynthesis under intense light, confirming that AtPHT4;4 was indeed the bridge that carries this nutrient through the chloroplast membrane (Fig. 1).

“Photosynthesis is an important system in plants for biomass production,” notes Kuromori. “An ascorbate transporter could potentially be used as a tool to control this process and improve yields, although isolating the transporter as a bioactive compound would be challenging.”