Rehabilitation can recover precise movements lost through brain damage, but the brain has a roundabout way of doing it 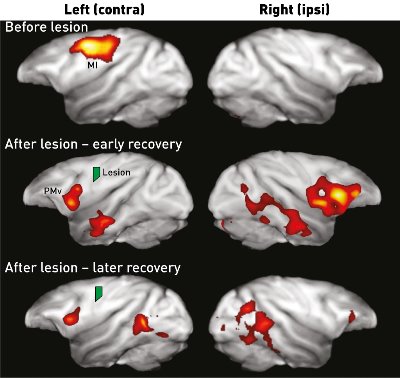 A study in which movement of the fingers is lost, but then recovered through daily rehabilitation, reveals that different brain areas are important over time as motor function returns1. The finding by RIKEN researchers could help in the rehabilitation of stroke victims.

Hirotaka Onoe and his team from the RIKEN Center for Life Science Technologies, in collaboration with Yumi Murata and Noriyuko Higo from the National Institute of Advanced Industrial Science and Technology, examined macaque monkeys recovering from small lesions made to their primary motor cortex, called M1.

The researchers first trained four monkeys to grasp food through an aperture. A small region of the monkeys’ M1 controlling the hand was then damaged, causing one hand to become flaccid. Immediately after this damage, the monkeys were unable to reach the food through the aperture, but after a month of daily training, the animals managed to get the food 80 per cent of the time. After two months, the monkeys were almost as dexterous as before the lesion (Fig. 1).

The experiment showed that despite permanent damage to that small region of M1, the monkeys recovered their motor function, presumably by using a different area of the brain.

To investigate how the brain was rewired to control the monkeys’ grasp, the researchers conducted positron emission tomography scans on two of the monkeys while performing the task. This revealed that the ventral premotor cortex (PMv) was very active, particularly one to two months after lesioning.

“The role of the PMv is not fully understood, but it has close connections with M1 and directly projects to the spinal cord. It is thought to plan, guide and control movement,” says Onoe.

The team corroborated this result by temporarily knocking out the PMv in two other monkeys recovering from similar M1 lesions. While the PMv was incapacitated, the monkeys’ recovery stalled, and they were once again unable to grasp the food.

“Because of its projection to the spinal cord,” notes Onoe, “it seems relatively easy for the brain to adapt and use the PMv to control motor movement after an injury to the M1.”

Later in the recovery process, the researchers observed increased connectivity in the M1 area bordering the lesion. “This would require plastic changes of neurons neighboring the lesioned area, and that takes time,” notes Onoe.

Although most strokes cause far more brain damage than the lesions in these experiments, Onoe observes that such models add incrementally to our understanding of stroke rehabilitation.