A chain of aromatic surprises 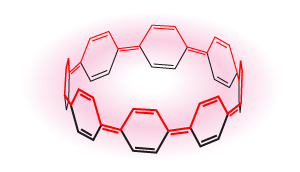 The source of the peculiar stability of the structures forming carbon nanotubes has been established by researchers from the RIKEN Elements Chemistry Laboratory1.

Carbon nanotubes are made of hoop-like macrocycles called cycloparaphenylenes (CPPs), which themselves are formed by the interlinking of six-carbon benzene rings. Ever since the first synthesis of a molecule in this family in 2008, researchers have been racing to make different sized rings and to explore their chemistry.

A dication (2+) form of cycloparaphenylene consisting of eight benzene rings (Fig. 1) had previously been found to be unexpectedly stable, but the reason for this stability was unclear. Atsuya Muranaka and Masanobu Uchiyama from RIKEN with co-workers from the University of Tokyo and Kyoto University have now discovered that the stability originates from aromatic stabilization.

The team first made the dication [8]CPP2+ by treating the neutral macrocycle [8]CPP with a strong antimony-based oxidizing agent. They then probed its electronic structure using a technique known as magnetic circular dichroism spectroscopy. Through extensive theoretical studies based on the acquired data, the team eventually found that in the dication [8]CPP2+, certain atomic orbitals—the envelope in which the atom’s electrons circulate—overlap both inside and outside the ring to create a stable planar ring arrangement called aromaticity.

As predicted, the neutral [8]CPP macrocycle displayed no evidence of aromaticity. The team then probed the electronic structure of the radical cation [8]CPP•+, which had also shown anomalous stability in earlier studies. The radical cation is not aromatic, as it lacks the correct number of electrons. “Instead,” notes Muranaka, “the stability of the radical cation may be associated with spin delocalization over the nanohoop.”

Further calculations led the team to predict that all the dications and dianions of cycloparaphenylenes containing between five and ten benzene rings possess in-plane aromaticity. They also found, unexpectedly, that a linear relationship exists between the ring size and its aromatic character. “We did not expect that the aromatic character would increase with decreasing size of cycloparaphenylene rings,” Muranaka says.

One reason for the interest in these molecules is their large range of potential applications. Neutral CPPs, for example, could be used as seeds or templates for growing carbon nanotubes, while the strong infrared absorption of the dication could find use in organic dyes and pigments.