Closing in on cancerous clusters 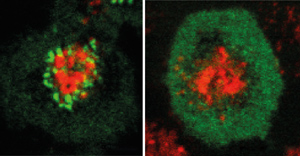 Many blood cancers are associated with excessive activation of molecular pathways that fuel the proliferation of immune cells. Some particularly lethal lymphomas are driven by uncontrolled signaling via the transcription factor NF-κB in immune cells called B lymphocytes. Researchers led by Takashi Saito from the RIKEN Center for Integrative Medical Sciences and Hiromitsu Hara from Kagoshima University have now revealed a process that sets this activation in motion1.

Previous work by the same research group had shown that NF-κB activation in immune cells might be driven by assembly of the protein CARMA1 into ring-shaped aggregates. These microclusters form near immunological synapses—structures at the cell membrane that enable communication between immune B- and T-cells and the antigen-presenting cells that direct the immune response. “We thought a structural analysis of CARMA1 might reveal how this protein is required for NF-κB activation and tumorigenesis,” says Saito.

Remarkably, they found that these two domains bind directly to each other, implying that CARMA1 interacts with itself. Subsequent structural analysis suggested that although such self-interaction within a single protein molecule is CARMA1’s preferred state, multiple CARMA1 molecules can also assemble with each other through SH3–GUK interactions.

Functional experiments showed that activation of immune cells via antigen receptors promotes CARMA1 microcluster assembly (Fig. 1) and NF-κB signaling. The interaction of SH3 and GUK was found to be essential for this activation, as was the ‘hinge’ domain that connects the two. The researchers hypothesize that this represents a switch that modulates whether CARMA1 molecules interact with themselves or with others.

Drugs that lock this switch could therefore interfere with the hyperactivation observed in NF-κB-driven lymphomas. Accordingly, Saito and Hara are now examining the effects of impaired CARMA1 aggregation in animal models and exploring whether this interference might successfully halt tumor formation and growth.