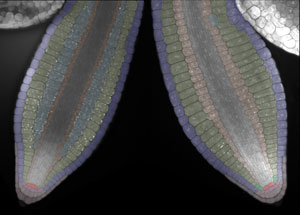 A novel protein, PUB4, that regulates cell division in root tips has been uncovered by genetic research led by the RIKEN Center for Sustainable Resource Science1.

The molecular pathways controlling the root meristem are poorly understood compared to those of the shoot meristem. Yet, as Atsuko Kinoshita from the RIKEN team points out, “Cell proliferation in the root meristem, which contributes to root elongation, is essential for the life of plants, as meristematic root cells absorb water and nutrients from soil.”

“Asymmetric cell division is a key step in generating diverse, functional cell types,” notes Kinoshita. “Our findings provide an insight into the mechanism controlling asymmetric division in the root meristem.”

Together, these results suggest that PUB4, which also has a role in pollen development, could regulate cell proliferation and the timing of cell division throughout the plant. According to Kinoshita, who is now at the Max Planck Institute for Plant Breeding Research in Germany, components such as PUB4 are important for understanding the robustness and complexity of the signaling networks that ensure correct development throughout higher organisms.

PUB4 is one of a class of proteins that mediate certain protein modification reactions. The next step for the RIKEN team is to identify the targets of PUB4, and thus the mechanism by which PUB4 controls cell division. “We need to identify the targets of PUB4 in order to understand its precise function and to picture the whole signaling pathway,” says Kinoshita. “We would also like to explore the integration of PUB4 signaling with plant hormonal pathways to get an overall understanding of these complex, but well-organized signaling networks.”