Shrinking x-ray pulses to the limit 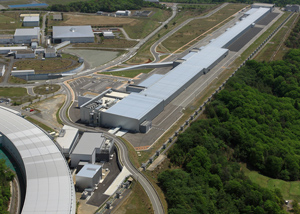 An x-ray laser source proposed by Takashi Tanaka from the RIKEN SPring-8 Center could be capable of generating the shortest x-ray pulses possible1. Such a light source would allow physicists to observe never before seen details of physical systems, such as the movements of individual electrons within atoms.

“To be honest, it is not clear what kind of phenomena will be observed by such an ultimately short pulse,” says Tanaka, “but we know that new tools are always followed by unexpected findings.”

Conventional lasers can produce bursts of light just a single wavelength long, which last for mere femtoseconds. However, generating such ‘monocycles’ of x-ray light, which are a thousand times shorter, is a much harder challenge.

The x-ray free-electron laser (XFEL), called SACLA (Fig. 1), at the SPring-8 synchrotron facility produces some of the most intense x-ray beams available, which are already used to probe the properties of materials in amazing detail. In this facility, electrons accelerated to close to the speed of light are funneled through a series of magnetic fields that make the electrons ‘wiggle’ from side to side. This wiggle causes the electrons to emit x-ray light at each change in trajectory to produce an intense x-ray pulse. At ultrashort pulse lengths, however, the x-rays tend to overtake the electrons inside the XFEL, which prevents the electrons from building up the power needed to produce a usable pulse of light.

Tanaka developed a solution that produces a train of electron ‘microbunches’. A seed pulse of monocycle laser light wiggles one of the microbunches, which then passes through magnetic fields that gradually increase its wiggle rate. With every turn, these electrons generate x-rays with a rising frequency.

As these x-rays speed away from the microbunch, they catch up with next microbunch in the train and make them move in synchrony. A second set of magnetic fields then forces the electron microbunch to generate more x-rays that pile up together into a single, intense, monocycle pulse.

By adjusting the timing between the electron beam and the x-rays, the system could generate high-power x-ray pulses just 1.6 wavelengths in length, lasting for 46 attoseconds. Feeding those x-rays back into the process as seed pulses would ultimately generate even briefer x-ray bursts with shorter wavelengths.

Tanaka notes that the equipment needed to build the system already exists at the SACLA facility, but the existing system will need major modifications to test his theory.