By mutually inhibiting signaling through a crucial developmental pathway, cells connected by an intercellular signaling circuit can be induced to change their fate 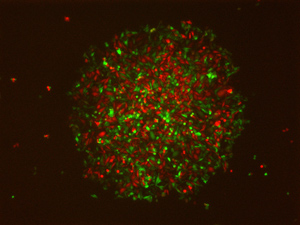 During development, signaling between adjacent embryonic cells allows them to differentiate into the many specialized cell types that make up multicellular organisms. These intercellular signaling mechanisms have traditionally been investigated by disrupting them pharmacologically or genetically. However, as a co-author of the study, Miki Ebisuya, now at the RIKEN Quantitative Biology Center, explains, “It is difficult to test if the identified components and inferred mechanisms are sufficient to explain the cell behaviors that are observed.” Instead, Ebisuya and her colleagues reconstituted an intercellular signaling pathway in Chinese hamster ovary cells and put current knowledge to the test.

Ebisuya’s team focused on an evolutionarily conserved signaling pathway that is mediated by a ligand known as Delta and its receptor, Notch. Both of these proteins span cell membranes, so signaling via this pair of molecules is restricted to neighboring cells.

Notch activation by Delta leads to a decrease in the expression of the gene encoding the Delta protein. Over time, a Delta-expressing cell becomes surrounded by cells that do not express Delta (called Notch-active cells), which as a result adopt a different cell fate. This intercellular signaling circuit, known as lateral inhibition, is involved in the specification of many cell types during both vertebrate and invertebrate development.

By introducing the genes for Delta and Notch, as well as a Notch-responsive repressor of gene transcription and a protein called Lunatic fringe that enhances the binding of Notch to Delta, Ebisuya’s team was able to trigger lateral inhibition and spontaneous cell-type bifurcations among genetically identical cells (Fig. 1).

Although the intercellular signaling circuit engineered by Ebisuya and her colleagues induces spontaneous cell-type bifurcation, the two different cell types produced in the circuit do not give rise to the regular cell patterns that are observed during development. “The next challenge,” notes Ebisuya, “will be to engineer a spatial cell pattern.”