A stress tracker for plants 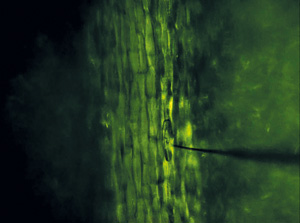 A new technique that allows stress responses in plant leaves to be monitored using single living cells could allow plant breeders to rapidly and non-destructively measure hormones, nutrient levels, pesticide residues or any cellular compound of interest1. The method, developed by a team led by Mitsunori Seo from the RIKEN Center for Sustainable Resource Science, is expected to be particularly useful for quality testing of agricultural products.

Plants respond to stresses by releasing minute quantities of hormones in a precise, localized fashion. For example, hormones known as jasmonates accumulate at the sites of cuts to induce wound healing, while during times of water scarcity, levels of another hormone called abscisic acid increase at microscopic pores on the surface of leaves to induce the pores to close.

Standard methods for measuring plant hormones require large amounts of plant tissue. “But hormone levels determined from a mixture of cells do not always tell us what is actually occurring within plants,” notes Seo.

To better understand the local distribution of hormones, Seo and his colleagues developed a method for quantifying hormone levels in individual cells. Working with the broad bean Vicia faba, the research team, which also included scientists from the RIKEN Quantitative Biology Center, applied a technique called nanoelectrospray ionization to add an electric charge to molecules inside single plant cells.

Obtaining samples from single cells was challenging. “Plant cells are surrounded by thick cell walls,” says Seo. “It took a lot of practice, but eventually we developed a reliable technique.” With the samples in hand, the researchers then measured the abundance of hormones using a common analytical chemistry instrument called a mass spectrometer.

In this way, the researchers detected abscisic acid in individual water-stressed cells and jasmonoyl-isoleucine—a type of jasmonate—in single wound-stressed cells. In contrast, both hormones were largely undetectable in broad bean leaf cells grown under non-stressed conditions.

Tracking abscisic acid and jasmonate levels could be just the tip of the analytic iceberg. According to Seo, the same basic methodology should be widely applicable beyond these two hormones. “Our method can be used to determine the levels of other hormones as well as primary and secondary metabolites,” he says. “However, we must optimize the procedures for each compound.”

The researchers continue to refine and improve the technique and also plan to develop quality control measures to account for potential impurities and for the variability in volume between different cells.