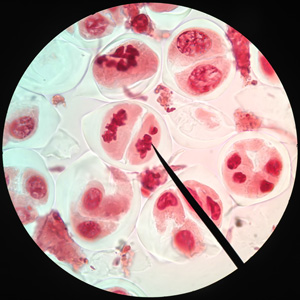 The internal workings of a cell involve many molecular components, and the ability to alter all of these components in tandem enables cells to adapt to different conditions. Research by Chikara Furusawa from the RIKEN Quantitative Biology Center and colleagues has now advanced our understanding of how these global changes are controlled by identifying a universal law that governs changes in gene expression as cells grow1.

Furusawa, in collaboration with Kunihiko Kaneko from the University of Tokyo and Tetsuya Yomo from Osaka University, used a technique called transcriptome analysis to measure the expression of thousands of genes across the genome in an attempt to reveal global changes in gene expression. They restricted their analysis to cells with a steady growth rate. This simplified model was based on the assumption that in order to maintain a steady rate of growth, cells must maintain their internal state by globally increasing gene expression.

This transcriptome analysis enabled the researchers to derive a formula that mathematically describes the global change in gene expression as cells grow. Specifically, they found that the change in the concentration of any intracellular component is related to the overall growth rate of the cell: a cell undergoing steady growth must sustain each of its internal components such that the abundance of all components doubles during each cell-division event.

“During adaptation and evolution, the changes in expression of all genes are highly correlated with one another, determined by a common proportion coefficient that is determined by the growth rate of the cell,” explains Furusawa. “Even though there is a huge number of molecular species inside cells, their change is constrained by this very simple law.”

The team tested their theory against real data for the commonly studied bacteria Escherichia coli and found good agreement, demonstrating that their model is biologically sound. Although restricting the model to cells that are growing steadily limits its applicability, Furusawa believes the technique holds promise.

“There are states in which cells do not grow, and ways in which we can characterize such dormant states remain to be discovered,” he explains. “We need to expand our theory to complex biological systems.”

The researchers are now investigating the evolution of E. coli under various environmental conditions, and they intend to apply the theory to describe the dynamics of adaptive evolution with several macroscopic variables.

“In the future, this approach might enable us to predict changes in adaptation and evolution, which is useful for engineering and medicine,” says Furusawa.