Even steps to quantum computation 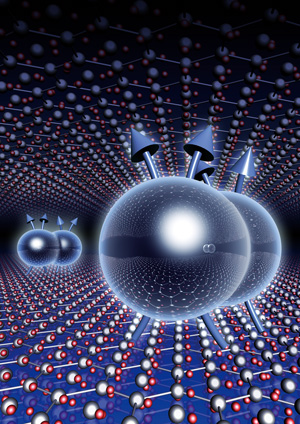 Electrons are normally free to move through a solid in all three dimensions. Restricting their motion to a two-dimensional surface can, however, radically alter the properties of the material. A RIKEN-led team has now created a two-dimensional system that displays an exotic physical effect that could be useful for quantum computing1.

Applying an electric potential between the two sides of a two-dimensional sheet of a semiconducting material under a magnetic field can cause charge carriers to flow sideways along the sheet. This is known as the Hall effect, and such materials display electrical resistance both in the direction of the applied voltage and perpendicular to it. The quantum Hall effect, a signature of two-dimensional systems, becomes evident when the magnetic field is increased and the perpendicular Hall resistance increases in discrete steps. Each of these steps corresponds to an electrical conductance equal to a fundamental constant multiplied by a fraction in which both the numerator and denominator are integers.

A team of researchers from the RIKEN Center for Emergent Matter Science, University of Tokyo, the Max Planck Institute for Solid State Research in Germany and other Japanese institutions has now observed the fractional quantum Hall effect in a two-dimensional system formed at the interface between zinc oxide and magnesium zinc oxide.

Fundamental to the team’s success in observing such an exotic quantum effect was the fabrication of high-quality material systems. The researchers created their ZnO-based structure using a method called molecular beam epitaxy, which is known for its ability to produce materials with high crystalline quality. They then attached eight electrical contacts to their sample and performed magnetoresistance measurements at ultralow temperatures.

The researchers observed a series of levels corresponding to fractional states, or filling factors, between 4/3 and 9/2. Most notably, even-denominator states were observed at 3/2 and 7/2, with some evidence for 9/2. Such a series has not been observed in any other material system.

These states are believed to arise because of the existence of quasiparticles made of pairs of electrons (Fig. 1). Such particle pairs are expected to be useful in quantum computers. “These quasiparticles are said to be topologically protected and are robust against weak perturbations,” says the study’s lead author Joseph Falson. “This is in contrast to quantum bits in say, silicon, which are very sensitive to slight changes in temperature or electric field. We now plan to probe the details of the states this work has unveiled.”