Proteins that glow yellow, orange or cyan can be used to illuminate a range of biochemical processes without light excitation 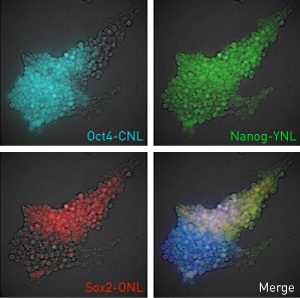 Figure 1: Each of the nano-lanterns highlights the expression of different genes in mouse embryonic stem cells. Reproduced, with permission, from Ref. 1 © 2015 A. Takai et al.

Fluorescent proteins are invaluable tools for studying biological processes, but they only glow when stimulated with an external light source, which can damage cells or trigger unwanted biochemical reactions. A RIKEN-led research team has now developed an alternative imaging technique using luminescent proteins called ‘nano-lanterns’ that are powered by chemical energy rather than light1.

Previous attempts to use luminescent proteins for imaging foundered because their light is usually too dim to track rapid changes inside cells. Instead, Yasushi Okada, Akira Takai and colleagues from the RIKEN Quantitative Biology Center, in collaboration with the team of Takeharu Nagai from Osaka University, looked to nature for inspiration.

Building on this work, Okada and his colleagues created two more coelenterazine-oxidizing luminescent agents using the same approach by coupling RLuc with cyan and orange fluorescent proteins. The resulting nano-lanterns are about 20 times brighter than natural RLuc. “The luminescent probes are bright enough to be detected with an iPhone camera,” says Okada.

To demonstrate their technique, the team attached nano-lanterns to cellular structures such as lysosomes to track their movements over several minutes. They also monitored the concentration of calcium ions in cells, using nano-lanterns with a mutant RLuc that was split in two such that the lanterns only shone when a calcium ion joined the two halves together.

Finally, the researchers used their nano-lanterns to study gene expression. By adding the genetic codes for the nano-lanterns next to three different genes inside mouse cells, the team was able to produce a distinct color signature when those genes were expressed. In just ten seconds, this revealed patterns of gene expression across a colony of cells (Fig. 1).

The nano-lanterns are still about 100 times dimmer than conventional fluorescent probes, and rely on a steady supply of coelenterazine to keep glowing, but Okada believes that these limitations are challenges that will be overcome. “Another goal is to create red nano-lanterns that could be useful for deep-tissue imaging,” he notes. The team is now developing microscopes for super-resolution luminescence imaging, and using the nano-lanterns to further analyze gene expression within single cells.