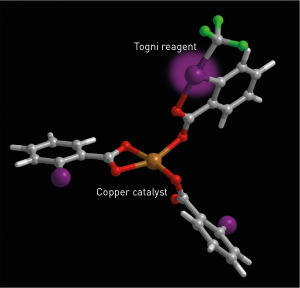 Figure 1: The reactivity of the Togni reagent is enhanced by coordination to the copper catalyst. © 2015 Mikiko Sodeoka, RIKEN Synthetic Organic Chemistry Laboratory

Molecules containing both a trifluoromethyl group (CF3) and a functional organic group called an amine have potentially interesting biological activity and are highly stable in the body. However, a straightforward and efficient method for synthesizing these pharmaceutically attractive molecules has proved elusive. By clarifying the reaction mechanism of a synthesis method they developed previously, Mikiko Sodeoka and colleagues from the RIKEN Synthetic Organic Chemistry Laboratory and RIKEN Center for Sustainable Resource Science have now devised an efficient and reliable scheme for producing these aminotrifluoromethylated compounds1.

“With our original reaction conditions, the choice of substrate was limited,” explains Sodeoka. To enable the synthesis of a wider range of molecules, the team studied the reaction’s mechanism in detail.

The synthesis involves reacting a starting molecule containing both an amine and an alkene, with what is known as a Togni reagent, which contains the CF3 group on an oxidized form of iodine, in the presence of a copper iodide as a catalyst. Other researchers had previously proposed that highly reactive free radicals were formed during the reaction, but no physical evidence for these had been found. “It was possible that a free CF3 radical could have been generated by the reaction of the catalyst with the Togni reagent,” says Sodeoka. “However, our experimental results clearly indicated that free radicals do not play a major role in this reaction.”

The team used a combination of kinetic studies to measure the rates of the chemical processes involved in the reaction, and spectroscopic analysis including nuclear magnetic resonance and mass spectrometry to identify some of the reaction intermediates. These studies confirmed that the Togni reagent coordinated to the copper catalyst to enhance its reactivity toward the starting molecule (Fig. 1).

Sodeoka and her colleagues then focused on the formation of trifluoromethylated pyrrolidine derivatives. Deciphering the reaction mechanism allowed them to correctly predict that adding the base triethylamine would eliminate an unwanted side reaction, boosting the speed of ring formation and therefore the yields of the final product.

“Based on the knowledge of the reaction mechanism clarified by this study, we were very pleased to find good conditions for amino trifluoromethylation-initiated pyrrolidine ring formation,” Sodeoka says. “Pyrrolidine is a kind of privileged structure for bioactive molecules, so our new method for the synthesis of trifluoromethylated pyrrolidine derivatives should facilitate development of new drugs and agrochemicals.” Sodeoka is hopeful that the results of this study will be useful for producing other difficult-to-synthesize aminotrifluoromethylated compounds.