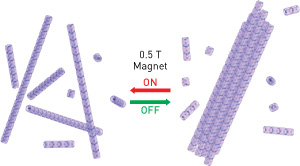 The magnetically driven, reversible bundling of one-dimensional (1D) arrays of superparamagnetic nanoparticles has been demonstrated for the first time by a RIKEN-led research team1. The technology unlocks the potential of these elusive 1D structures with possible applications as bioimaging contrast agents and in magneto-responsive devices.

The lateral assembly of superparamagnetic nanoparticles (SNPs) into 1D structures has been predicted theoretically, but scientists have found it difficult to synthesize assemblies that are both thermodynamically stable and sufficiently rigid to inhibit entanglement. Yet such 1D SNP arrays continue to attract broad scientific attention due to their potentially useful properties such as a large magnetic susceptibility in one dimension, which could allow them to self-assemble under a moderate magnetic field, and a thermally fluctuating magnetic spin under ambient conditions that makes them magnetically isotropic—features that are not found in more conventional ferromagnetic nanoparticles.

Taking an unusual approach, Daigo Miyajima, Takuzo Aida and colleagues from the RIKEN Center for Emergent Matter Science and other institutions in Japan have now succeeded where others have not by encasing the nanoparticles in protein nanotubes.

The researchers formed their protein nanotubes by a process called supramolecular polymerization using the barrel-shaped protein, GroEL. This polymerization results in the formation of micrometer-long protein nanotubes with hydrophobic internal cavities housing the SNPs. These protein ‘jackets’ both protect the superparamagnetic nanoparticles, which are formed from iron oxide, and permit the self-assembly of ordered 1D nanoparticle arrays.

In the 1D structure, the magnetic moments of the individual SNPs arrange into a tip-to-tip configuration that induces a large magnetic moment along the long axis of the 1D SNP array. Under a magnetic field, this causes the 1D structures to assemble into thick bundles (Fig. 1). The protein jackets provide the physical separation needed to allow the bundles to completely dissociate when the magnetic field is turned off to give the original, isolated 1D arrays. The bundles formed are also quite selective, with arrays of similar lengths tending to bundle together. These characteristics give the system excellent homogeneity and high stability under ambient conditions.

“The most interesting aspect of our system is that the nanoparticle arrays reside inside the protein nanotubes,” says Miyajima. “We envisage broadening this concept to functional materials, dual-responsive materials and even a magneto-induced gelation system. Also, because the magnetic field is a non-invasive directing force, we are interested in making biomaterials, such as smart magnetic resonance imaging contrast agents controlled by chemical signals.”