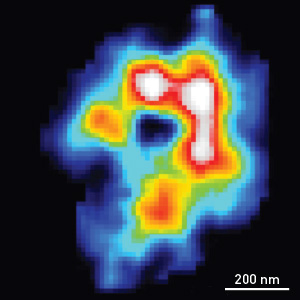 Figure 1: A map of the electron density of an algal chloroplast obtained using coherent x-ray diffraction imaging. The high-density area exhibits a C-shaped profile, which suggests that photosynthetic proteins are concentrated in the marginal regions of chloroplast. Reproduced, with permission, from Ref. 1 © 2015 Oxford University Press/Japanese Society of Plant Physiologists

Using a high-power x-ray laser, researchers from RIKEN, Tokyo University of Science and Keio University have visualized the site of photosynthesis inside the chloroplasts of a small red alga at an extremely high resolution1.

Cell biologists seek to understand how cellular processes occur at various levels in time and space, such as the cascading processes whereby a single molecule evokes a response at the cellular level.

Existing techniques for such investigations are limited. Light microscopy of live cells has proved very useful for gaining such knowledge, but its resolution is restricted to approximately 200 nanometers. On the other hand, electron microscopy can realize much higher resolutions, but it requires sectioning thick samples.

In the current study, the researchers used coherent x-ray diffraction imaging (CXDI), a new technique that combines the advantages of light and electron microscopy. “The technique can be used to visualize internal structures of whole cells or organelles, which are too thick for electron microscopy and beyond the resolution of light microscopy,” explains Yuki Takayama of the RIKEN SPring-8 Center, one of the lead authors of the study.

The research team used an x-ray free-electron laser (XFEL) to perform CXDI of chloroplasts isolated from the unicellular red alga Cyanidioschyzon merolae. They chose this hot-spring-dwelling organism as they wanted to explore functions such as photosynthesis. “C. merolae is particularly suitable for studying cell functions because it is one of the smallest eukaryotes and has a simple cellular architecture,” says Takayama.

While XFEL-CXDI is advantageous for visualizing native structures at high resolution, the intense x-ray beam destroys the sample after imaging, making it difficult to obtain sharp images. The team overcame this problem by imaging many chloroplasts cryo-fixed on a single substrate and then selecting diffraction patterns with high signals. This enabled them to reconstruct high-resolution images of the chloroplasts from the diffraction data.

They were able to visualize the distribution of electrons in the chloroplasts with a resolution of 70 nanometers―much higher than that of light microscopy. The electron-density maps exhibited a C-shaped structure (Fig. 1), which is similar in size and shape to those obtained in fluorescence images of stained chloroplast proteins. This agreement indicates that membranes rich in photosynthetic proteins are distributed in the marginal regions of chloroplasts.

The team intends to improve the resolution of their technique―possibly to better than 20 nanometers. “By visualizing whole C. merolae cells using this technique, we hope to understand how organelles cooperate in cell functions,” Takayama says.