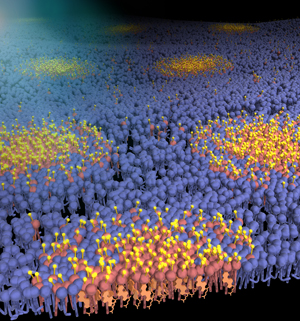 In a previous collaboration, a team of researchers led by Mikiko Sodeoka at the RIKEN Synthetic Organic Chemistry Laboratory and Katsumasa Fujita at Osaka University developed a way to image small, mobile bioactive molecules in living cells, with the potential to greatly enhance our understanding of cellular processes. The method involves tagging bioactive molecules with small alkyne molecules and then imaging them using Raman microscopy―a technique that detects the vibrations of molecules by exciting them using a microscope-focused laser beam. Unlike the comparatively large fluorescent tags used in conventional approaches, the alkyne tags used in Sodeoka’s method do not alter the physical properties of bioactive molecules or impede their motion in cells.

One of Sodeoka’s collaborators, Michio Murata at Osaka University, suggested applying the technique to lipid rafts―small domains in cell membranes that are rich in lipids such as cholesterol and sphingomyelin and that play important roles in membrane signaling and protein trafficking.

“Murata told us it would be a real breakthrough if we could ‘see’ the distribution of sphingomyelin in the raft structure,” Sodeoka says. But this required overcoming two major challenges.

Because lipid rafts are constantly moving in the cell membrane, it is very difficult to pin them down long enough to obtain an image. Furthermore, the low number of lipid rafts in membranes makes it hard to extract their signals from the background noise.

The researchers overcame both challenges by drawing on the strengths of their respective teams. Murata’s group made long imaging times possible by preparing artificial membranes with a raft-like composition and immobilizing them on a surface, while Sodeoka’s and Fujita’s groups obtained strong signals from lipid rafts by employing a small, strongly Raman-active conjugated diyne tag and their highly sensitive Raman microscope.

Using these tactics, the researchers observed a gradually varying distribution of sphingomyelin in ordered rafts (Fig. 1).

“Many people assumed that ordered and disordered domains in lipid rafts were clearly separated, but our results suggest the existence of some interface area,” Sodeoka explains. “This was an unexpected finding.”

The technique developed by the team opens the way for in-depth functional studies of lipid rafts. “Before our work, there was no method capable of quantifying the molecular distribution of one specific lipid in an ordered domain,” says Sodeoka. “Our next goal is to visualize one specific lipid in living cells.”