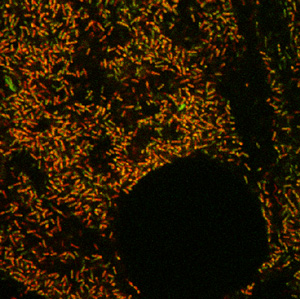 Figure 1: Endosymbiotic spirochetes adopt an atypical rod shape inside the protist cell that lives in the guts of termites. (The large dark region is the nucleus of the protist cell.) Reproduced, with permission, from Ref. 1 © 2015 M. Ohkuma et al.

The bacterial species responsible for producing energy and nutrients that fuel wood-feeding termites has been pinpointed by a research team led by RIKEN scientists1.

Termites thrive on a diet of wood thanks to a remarkable biological coexistence involving two other organisms. A symbiotic protist that lives in the guts of these wood-eating insects breaks down cellulose found in plant cell walls. And inside each protist lives beneficial bacteria that assist the metabolic process.

“This symbiotic relationship makes efficient use of the abilities of both the bacteria and the protist and it substantially benefits the carbon, nitrogen and energy metabolism of the host termite,” says Moriya Ohkuma, head of the microbe division at the RIKEN BioResource Center in Tsukuba.

Ohkuma and his colleagues discovered that the bacteria in this three-way symbiosis play two key roles: they transform the by-products of the protist’s breakdown of cellulose into an energy source that termites can use, and they take nitrogen from the atmosphere and turn it into a nutrient. Previously, it was not known which bacteria were behind these functions nor the extent to which they contributed to the activities of the whole gut.

The team measured the activities of these two key roles with careful fractionations of gut microbes. This enabled them to identify one bacterial species inside the protist’s cells as the main contributor to gut activities; this species belonged to the spirochetes. Since culturing the microbes was not an option, the scientists did the next best thing―they sequenced all the genes from this bacterium.

The researchers discovered an unexpected ‘twist’. With very few exceptions, spirochete species typically have spiral morphologies, but this one had a simple rod shape (Fig. 1). Furthermore, it lacked flagella, which are necessary for maintaining a spiral shape.

This microbe was responsible for most of the beneficial energy and nutrition production. The researchers analyzed the draft genome of this species and discovered several genes that explained its metabolic abilities.

This spirochete is closely related to other spirochetes found on the cell surface of the same protist in the termite gut. Ohkuma suspects that the inside species (the so-called endosymbiont) probably descended from its outside cousins.

He plans to compare the functions and genomes of these two close relatives to determine whether the energy and nutrient roles of the endosymbiont were newly acquired after the microbe colonized the protists’ innards or whether these were ancient abilities. Further studies will shed light on how the genome has started to change during the evolution of symbiosis.