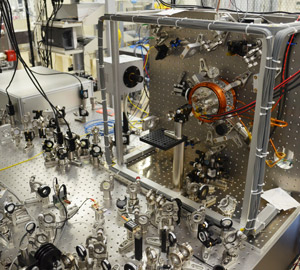 A clock that in the future could be used to investigate miniscule changes in the physical ‘constants’ of the Universe has been developed by RIKEN researchers1.

When an electron in an atom relaxes from a high-energy state to a lower one, it usually emits electromagnetic radiation with a very well-defined frequency. Atomic clocks use this phenomenon to measure time with a remarkable precision.

But such clocks have limitations. In particular, the emission frequency can vary owing to thermally induced movements of the atom. RIKEN researchers are developing an alternative approach―optical lattice clocks. These clocks incorporate not one but many atoms.

“An optical lattice is an ‘egg-carton’ like cage for thousands of atoms that is created by a standing wave of light,” explains Hidetoshi Katori of the RIKEN Quantum Metrology Laboratory. “This atom cage is designed so as not to affect the oscillation of the atomic pendulum trapped in the lattice, which significantly improves the signal-to-noise ratio of the measurements over conventional atomic clocks that observe just a single ion.”

The latest optical lattice clock created by Katori and his team is based on an array of mercury-199 atoms (Fig. 1). They have now demonstrated that its accuracy surpasses the current International System of Units (SI) definition of the second―a critical milestone toward developing clocks that can be used to realize a more accurate SI definition of the second.

The only way to way to measure the clock’s precision was to optically link it to another even more accurate optical lattice clock, one that uses strontium-87 atoms. This allowed the team to determine that their mercury-199 clock was accurate to 17 digits of precision; that is, it would lose one second every 440 million years.

The researchers had to consider seemingly trivial causes of error when evaluating this. For example, they had to include tiny effects such as the slightly weaker gravitational field that one clock felt because it was 5 centimeters higher than the other one.

“We hope next to improve the measurement precision of the frequency ratio of the mercury and strontium clocks,” says Katori. “Then, we could experimentally investigate if the fine-structure constant varies, and thus investigate a foundational idea in physics, namely the constancy of fundamental constants.”