Not all plant growth hormones are the same 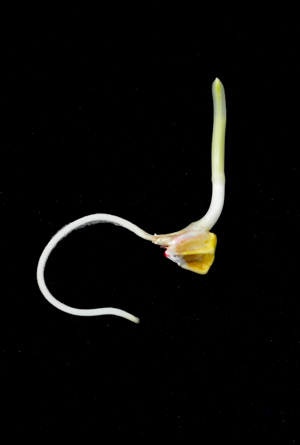 Plant growth is directed by molecules called auxins, which actively change their distribution within a plant in response to environmental cues such as light and gravity. Now, RIKEN researchers have discovered that one member of this hormone family does not undergo such active transport, and may serve a different function to other auxins1.

The best-known auxin is indole-3-acetic acid (IAA), but there are other related compounds such as phenylacetic acid (PAA), whose roles are much less clear. “The study of IAA, which was identified as an auxin in the 1930s, has its roots in Charles Darwin's phototropism experiments of 1880,” explains Hiroyuki Kasahara, from the RIKEN Center for Sustainable Resource Science, who led the study. “But it has been reported that higher plants also produce PAA as an auxin, even though it has relatively low biological activity compared with IAA.” Previous studies indicated that, unlike IAA, plant tissues may not actively transport PAA. To resolve this question, Kasahara’s team analyzed PAA production and distribution in various plants.

They found that PAA was produced more abundantly than IAA, and that the levels of this auxin varied considerably from tissue to tissue. The researchers also confirmed that PAA seems to activate some of the same growth-related biochemical pathways triggered by IAA, although to a considerably lesser extent. The auxin receptor complexes formed by PAA and IAA did not overlap completely, suggesting that the two auxins may exert different physiological effects, despite activating very similar subsets of genes.

Kasahara’s team next examined the auxin distribution within the sheath surrounding maize seedling shoots, a structure known as the coleoptile (Fig. 1). While both IAA and PAA showed similar distributions—a gradient with the highest density at the coleoptile tip—only IAA appears to employ an active transport system to achieve this distribution. Likewise, changing the orientation of the maize shoots from vertical to horizontal led to a rapid redistribution of IAA within the coleoptile, whereas the PAA gradient remained largely unchanged.

Kasahara found this result striking. “People have considered polar transport to be a fundamental function of naturally occurring auxin,” he says, “but PAA lacks this property.”

His team identified some genes responsible for PAA production and found that they partially overlapped with the IAA-generating machinery. However, PAA production was not halted by mutations that thwart IAA synthesis, suggesting that distinct pathways may also be involved. “We are now trying to show a specific role of PAA in plants that might be evolutionally conserved,” says Kasahara.