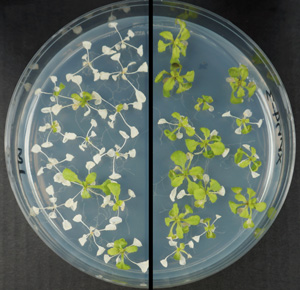 The mass destruction of RNA, which is considered to be a plant adaptation to thermal stress, can sometimes be counterproductive for heat acclimation, find RIKEN researchers.

As sessile organisms, plants cannot move around. But they can respond to adverse environmental conditions by altering the molecular landscape of their cells. When exposed to elevated temperatures, for instance, plants will target several thousand different RNA molecules for rapid degradation.

Working with the thale cress Arabidopsis thaliana—a model system for plant biology studies—a team led by RIKEN researchers has shown that the enzyme responsible for much of the heat-induced degradation also wipes out several key regulators of heat tolerance1.

The heat-induced RNA decay is driven by an enzyme known as Arabidopsis 5'-3' exoribonuclease (AtXRN4). To better understand the molecular targets of AtXRN4, Motoaki Seki and his colleagues at the RIKEN Center for Sustainable Resource Science, along with collaborators at other institutions in Japan and Vietnam, studied plant strains with genetic mutations that rendered the AtXRN4 enzyme non-functional. Surprisingly, they found that these mutant plants were more likely to survive after exposure to severe short-term heat stress—temperatures of around 44 degrees Celsius for 3 to 4 hours—than normal plants with a working version of the enzyme (Fig. 1).

The researchers compared gene expression patterns in mutant and normal two-week-old seedlings. They found higher expression levels of several heat-stress-responsive genes in the mutant plants, both those subjected to extreme temperatures and those exposed to non-stressed conditions. The most important such gene seemed to be heat shock factor A2 (HSFA2 ); mutant seedlings lacking both this gene and the one encoding AtXRN4 were no more heat tolerant than normal plants.

These heat-tolerance genes that AtXRN4 usually degrades are beneficial for responding to hot conditions, but their expression can also be maladaptive during times of non-stress-inducing temperatures. The researchers hence concluded that AtXRN4 is required for maintaining a proper balance between the creation and destruction of stress-response RNAs. For instance, AtXRN4 is needed to degrade HSFA2 mRNA after plants have acclimated to hotter temperatures and returned to normal growth conditions.

This finding could aid the development of more stress-tolerant crops, which is especially important given the rising temperatures caused by global climate change. For example, plant breeders could tweak AtXRN4 levels to engineer hardier food staples for the agriculture industry.