Nuclear physics experiments support the existence of a new, stable ‘magic’ number of atomic neutrons in a relatively unexplored region of exotic nuclei 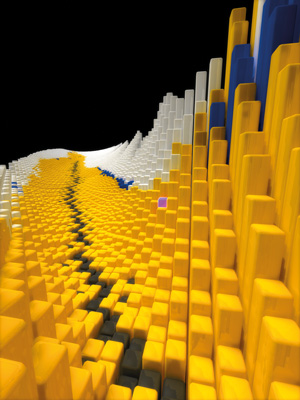 Figure 1: A map showing the natural and exotic nuclei and their stabilities. The isotope argon-50 (pink), which has 32 neutrons and 18 protons, has been shown to contain a magic number of neutrons. © 2015 Narumasa Miyauchi, RIKEN Nishina Center for Accelerator-Based Science

The unique capabilities of RIKEN’s Radioactive Isotope Beam Factory (RIBF) have made it possible to verify that the isotope of argon with 32 neutrons is sufficiently stable to be considered ‘magic’1. This finding supports the existence of a new magic neutron number of 32 for elements in the sub-20 atomic number range and demonstrates that there is much to explore in this region of light exotic nuclei.

The stability of a nucleus is determined by how many protons and neutrons it contains. Most naturally occurring light atoms have roughly equivalent numbers of protons and neutrons and are relatively stable. When there is a large imbalance in these numbers, the nucleus will be unstable and will exist for only a limited time before undergoing radioactive decay.

Isotopes with certain magic numbers of protons or neutrons are unusually stable, which physicists attribute to the complete filling or ‘closure’ of energy levels called nuclear shells. The set of standard magic numbers in long-lived nuclei—2, 8, 20, 28, 50, 82 and 126—is well established as an explanation for many observations in nature. However, things become more complicated for exotic isotopes that can be produced using particle accelerators.

“The evolution of nuclear shell structure in exotic nuclei is one of the major current topics in experimental and theoretical nuclear physics,” explains David Steppenbeck, who led the research team. “A new neutron magic number of 32 has been reported in calcium and titanium, but this subshell closure has remained unexplored in very exotic nuclei such as argon.”

Steppenbeck and his team, which included researchers from the RIKEN Nishina Center, the University of Tokyo and other institutions in Japan and Italy, studied in detail the isotope argon-50, which has 32 neutrons and 18 protons. Such a study is challenging because of the difficulty in generating sufficiently large numbers of these nuclei. “The unique intensities of the radioactive beams provided by the RIBF were essential to the current study,” says Steppenbeck. “Although other facilities can produce argon-50 ions, their production rates are too low to perform a study like ours in realistic time frames.”

The team’s results firmly establish the persistence of the neutron magic number 32 in systems with fewer than 20 protons (Fig. 1).

“The behavior of these neutron subshell closures in nuclei even farther from stability, such as sulfur and silicon, is also of great interest,” notes Steppenbeck, “although investigating this exotic nuclear region will require further development of our current experimental tools.”