A hydrogel flexes its muscles

A water-based polymer can stretch, contract and even walk like an artificial muscle in response to temperature changes

Hydrogels are translucent, squishy polymers that resemble tissues by holding large amounts of water within an interlocked molecular network. A team led by RIKEN researchers has developed a way to cause these biocompatible materials to act like artificial muscles that rapidly expand and contract when heated and cooled1. To demonstrate the potential of this approach, the team fabricated an L-shaped prototype that changes shape and ‘walks’ across a surface when subjected to temperature changes.

While hydrogels have garnered interest for applications such as scaffolds for tissue growth, researchers have found it challenging to turn them into controllable actuators that simulate muscle movement. Most hydrogels swell or shrink in response to water absorption or desorption, but these deformations occur uniformly, whereas actual muscles deliver forces in specific directions. Furthermore, expelling and absorbing water from hydrogels is usually a slow process, and thus cannot match the fast responses of muscles.

Now, Yasuhiro Ishida from the RIKEN Center for Emergent Matter Science and his colleagues have designed a hydrogel whose properties differ considerably from those of other hydrogels. Their thermoresponsive material can lengthen in one direction and contract in another without taking up or releasing water, allowing this muscle-like device to operate rapidly in an open-air environment. The secret to this behavior lies in the tiny nanosheets embedded in the hydrogel that harness electrostatic repulsion to make the hydrogel perform like a coiled spring.

The first kinds of hydrogels scientists encountered were natural materials such as collagen and gelatin that swell when placed in water. Chemists soon devised ways to cross-link synthetic polymers together to form similar water-attracting gels. Such synthetic hydrogels have the advantage that they can be tailored to specific applications; for example, contact lenses require hydrogels with a high oxygen permeability, whereas drug delivery systems need hydrogels that are sensitive to external stimuli.

Ishida and his colleagues have been investigating a novel addition to standard hydrogel recipes: tiny flakes of see-through, two-dimensional crystals known as nanosheets that can add electric charges to the usually inert materials. Previously, the team used clay nanosheets to produce hydrogels that quickly self-heal after being sliced with a knife. In this case, ionic charges on the nanosheets stimulate new cross-linking reactions when the damaged gel is pushed together.

In their latest study, the RIKEN researchers collaborated with Takayoshi Sasaki from Japan’s National Institute for Materials Science, a pioneer in the field of layered nanomaterials, to study substances known as exfoliated titanate nanosheets. Composed of ultrathin titanium–oxygen layers that are several micrometers long, titanate nanosheets have an extremely high density of negative surface charges and have found prior success as photocatalysts and biomolecular trapping agents.

Intriguingly, the team discovered that when an aqueous dispersion of titanate nanosheets is hit with a strong magnetic field, the nanosheets align themselves into stacked layers (Fig. 1). This face-to-face arrangement produces a large electrostatic repulsion that holds the sheets apart—an unusual situation since man-made materials are usually held together by attractive interactions.

Harnessing this potential energy for hydrogel devices required finding a way to fix the magnetically induced structure in place. To achieve this, the researchers added the monomer N-isopropylacrylamide (NIPA) to an aqueous suspension of titanate nanosheets and exposed the mixture to magnetic fields while simultaneously irradiating it with ultraviolet radiation. The ultraviolet light initiates photopolymerization that cross-links the polymer of NIPA (PNIPA) with an organic binding agent, creating a hydrophilic gel that envelops the titanate nanosheet stacks and ensures that the face-to-face configuration remains after the magnetic field is switched off.

The molecular structure of PNIPA is known to be highly temperature sensitive. But when the team tested how a 15-millimeter-long, rod-shaped sample of the new hydrogel responded to water baths of various temperatures, they were shocked—in one second, the hydrogel elongated by over 70 per cent in warm 50-degree-Celsius water, while a cooler 15-degree-Celsius bath produced a similarly fast contraction.

“Every researcher in this field believed the opposite should happen—they thought PNIPA hydrogels should contract on heating and expand on cooling,” explains Ishida. “When we saw our deformations, we were sure there was some new physics behind this phenomenon.”

Figure 1: Researchers have created a muscle-like hydrogel by trapping face-stacked inorganic nanosheets within a polymer network. The repulsive force between the charged nanosheets becomes greater with increasing temperature, causing the material to elongate in one direction. Adapted by permission from Macmillan Publishers Ltd: Nature Materials (Ref. 1), copyright 2015

To better understand this system, the researchers examined a square hydrogel as the temperature was slowly raised from 25 to 45 degrees Celsius (Fig. 2). This analysis showed that once the polymer reached 32 degrees Celsius, it swiftly lengthened in one direction while simultaneously contracting in the other. The team deduced that above this critical temperature, the PNIPA releases free water held between the charged nanosheets. This process causes instant elongation without significantly changing the volume as the sheets move apart to reduce electrostatic repulsion. Cooling the gel produces the opposite effect.

“The three-dimensional network that supports our hydrogel behaves like a net composed of coiled springs,” explains Ishida. “The nanosheets are trapped within it and can move without falling apart.”

The researchers exploited their hydrogel’s large and rapid thermally induced shape changes by designing an actuator that walks when exposed to alternating temperature cycles. Their L-shaped gel contains two ‘feet’ in contact with a horizontal, underwater surface. On heating, the back foot elongates, propelling the gel forward. A quick plunge in temperature then draws the feet back into position for another kick forward. “It’s remarkable to watch the hydrogel walk,” says Ishida. “It’s as if it had a will of its own.”

The team is currently working on improving this material’s properties with a view to achieving their ultimate goal—a new generation of hydrogel-based artificial organs and muscles.

Figure 2: A square section of a new thermoresponsive hydrogel lengthens in one direction while simultaneously contracting in the other—kinematics similar to those seen in human muscles. © 2015 Yasuhiro Ishida, RIKEN Center for Emergent Matter Science 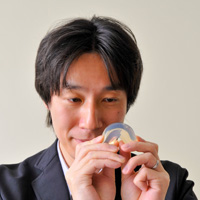 Yasuhiro Ishida received his Bachelor of Science and Master of Science degrees in 1996 and 1998, respectively, from the University of Tokyo, Japan. In 2001, he received his PhD degree under the direction of Professor Takuzo Aida at the same university, and went on to launch his academic career as a research associate and lecturer. In 2009, Ishida was appointed as a team leader at RIKEN. His research interests include the development of smart soft materials based on supramolecular chemistry and polymer chemistry.