How a star turns inside out 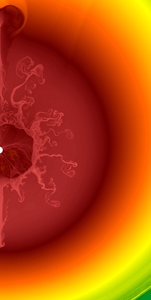 Figure 1: A simulation of supernova SN1987A suggests that lower-density material can form tendrils that push into the star’s outer layers as it explodes from the core (center left). Reproduced by permission of the AAS from Ref. 1 © 2015. The American Astronomical Society.

When the core of a massive star collapses under its own gravity, it can trigger a supernova—an incredibly energetic explosion that flings the star’s content far out into space. Detailed simulations now suggest that density variations between layers inside the star could help accelerate that core material to remarkable speeds1.

A team of researchers led by Shigehiro Nagataki of the RIKEN Astrophysical Big Bang Laboratory based their simulation on supernova SN1987A, which formed from a blue supergiant star that exploded in the Large Magellanic Cloud, a nearby galaxy. Material from the star’s core, including clumps of a radioactive isotope of nickel (56Ni), streaked out in long ‘fingers’. Up to 17 per cent of this nickel moves faster than 3,000 kilometers per second—similar to the speeds of hydrogen and helium blown from the star’s outer layers. Astronomers have struggled to explain how this core material could exit the star so quickly.

One possibility is that as the exploding core pushed relatively low-density material into the star’s outer layers, it created a form of turbulence (known as Rayleigh–Taylor instability) similar to the mushroom cloud of gas and ash from a volcanic eruption. But the precise origin and location of this instability have remained a mystery.

Nagataki’s team’s simulation now offers an answer. They based their model on a blue supergiant, which is more than 16 times the mass of our own Sun. It has a nickel core surrounded by successive onion-like layers that are rich in sulphur, silicon, oxygen and carbon, helium and finally hydrogen. Simulations performed for several different types of supernova explosions revealed the conditions that most closely matched astronomical observations (Fig. 1).

The simulation produced high-speed nickel clumps when there were density fluctuations of 25 per cent or more at the interfaces between the helium and carbon–oxygen layers, and between the helium and hydrogen layers. The simulated explosion was also asymmetric, with more material funneled into jets on opposite sides of the star, and with one jet more powerful than the other. This model is the most accurate reproduction of SN1987A to date, says Nagataki.

The underlying density fluctuations could arise from convection currents inside the star, says Nagataki. “As for the asymmetric and jet-like explosion,” he adds, “it can be produced at the center of the supernova.”

The simulation successfully reproduces the first few hours after the birth of SN1987A. The team now hopes to extend their model to cover the entire 28-year lifetime of the supernova.