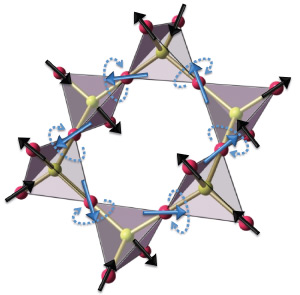 Figure 1: In spin ice crystals, the magnetic spins of electrons (black and blue arrows) make it difficult for the system to reach its lowest energy state. Quantum interactions can cause spins to flip and lead to ring-like, aligned arrangements of the spins (blue arrows). © 2015 Shigeki Onoda, RIKEN Center for Emergent Matter Science

Physicists have long been seeking to uncover a grand unified theory in which the three non-gravitational forces—the electromagnetic force and the strong and weak nuclear forces—merge into a single force at high temperatures. Such a theory is seen as a critical stepping stone to realizing a ‘theory of everything’ that combines all four forces. Some grand unified theories that have been proposed predict the existence of magnetic monopoles—the magnetic equivalent of electric charges—in certain crystals.

In the crystals of some oxygen-containing compounds, electron spins are arranged at the edges of the tetrahedrons that make up the crystal structure (Fig. 1). In the absence of an external magnetic field, these materials should be non-magnetic, with the same number of spins pointing in each direction. In a crystal, there are endless configurations for achieving this. At low temperatures, spins do not have enough energy to rearrange themselves, and thus the system is ‘frozen’ into one of these arrangements. These materials are referred to as a spin ice, in analogy to water ice, which is a random arrangement of water molecules.

Now, Shigeki Onoda and Yasuyuki Kato from the RIKEN Center for Emergent Matter Science have performed calculations to investigate how, at low temperatures, quantum effects in these materials can cause them to ‘melt’1. Their findings highlight the importance of quantum physics in helping systems to reach favorable energy states.

While, according to classical physics, the spins in a spin ice should be frozen at low temperatures, quantum effects allow the spins to interact with each other. “The quantum nature of spins allows for exchanging nearest-neighbor spins,” explains Onoda. Such a system is thus termed a quantum spin ice.

By performing computer calculations, the researchers studied how at low temperatures these quantum interactions cause the quantum spin ice to melt through flipping of spins. Through these quantum effects, the spins can align (blue spins in Fig. 1) and can collectively change their orientation. These collective changes of spin patterns can travel through the crystal in a similar way to particles of light, and are thus dubbed ‘photons’.