Copper atoms made to lase at ultrashort x-ray wavelengths 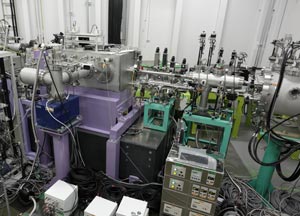 Figure 1: Photograph of the experimental setup used to achieve a copper atomic x-ray laser. The copper foil target is mounted in the sample chamber (left) and is bombarded with an x-ray beam (from right) generated by the SACLA x-ray free-electron laser. © 2016 Makina Yabashi, RIKEN SPring-8 Center

Almost half a century ago, scientists theoretically predicted that copper atoms could be made to lase in the x-ray region by exciting them with x-rays of a suitable wavelength. The incident x-rays eject electrons from inner electron shells, resulting in a cascade of electron energy drops that produce light at a very specific wavelength of 1.5 ångströms—a length similar to the diameter of a copper atom. The emitted photons are then amplified by interacting with other excited copper ions, resulting in a process known as amplified spontaneous emission (ASE). Until now, this kind of x-ray amplification had been impossible to achieve in the lab due to the inconceivably high excitation intensities it demands.

Now, Hitoki Yoneda of the University of Electro-Communications and RIKEN SPring-8 Center and Makina Yabashi of RIKEN SPring-8 Center with their co-workers have succeeded in stimulating ASE of hard x-rays and used it to produce laser pulses with a wavelength of 1.5 ångströms. They realized this by shining very short pulses of intense x-rays from SACLA onto a copper foil (Fig. 1). ASE was further enhanced by combining the excitation ‘pump’ pulse with a ‘seed’ pulse from the same XFEL excitation source operating in two-color mode—a unique functionality of SACLA.

“We needed an extremely intense x-ray beam to create the highly excited states of copper atoms,” explains Yabashi. “The SACLA x-ray source has the highest intensity in the world, which we combined with state-of-the-art x-ray optics technology to focus the XFEL beam to a spot just 100 nanometers in diameter.” With this approach, the team achieved an unprecedented power density of about 1019 watts per square centimeter.

Although x-ray free-electron lasers are capable of producing hard x-rays at ångström wavelengths—SACLA itself supplies a 1.4-ångström x-ray pulse to stimulate ASE from the copper foil—they produce ‘fuzzy’ beams at such short wavelengths. This fuzziness poses problems for probing phenomena at very short time scales or spatial scales approaching the laser wavelength.

In contrast, atomic lasers generate x-rays with much sharper wavelength distributions and higher temporal coherence over the pulse duration. Consequently, the atomic inner-shell laser has exciting potential for such research. “We expect this technology may be applied, for example, to explore quantum interference on a zeptosecond [10−21 second] scale,” notes Yabashi.