Scanning tunneling microscopy is used to probe electrons in an unconventional superconductor, and uncovers an unexpected energy gap 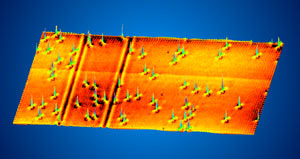 The properties of electrons around junctions between unconventional superconductors have been directly measured for the first time, opening up a way to explore the unusual behavior of these electrons1.

When a superconducting material is cooled below its critical temperature, its electrons form bound pairs—known as Cooper pairs—that carry electrical current without resistance. If two superconductors are close to each other, Cooper pairs can move between them via a quantum-mechanical process known as tunneling. This phenomenon has been exploited to create sensitive devices for measuring magnetic fields.

But a growing number of unconventional superconductors have been identified that do not behave according to the prevailing theories of superconductivity, and the nature of Cooper pairs in these materials is poorly understood.

Working as part of an international team, researchers at the RIKEN Center for Emergent Matter Science studied one such unconventional superconductor called iron selenide (FeSe). It contains twin boundaries—fault lines within the crystal that have mirror-image arrangements of atoms on each side. Each twin boundary acts as a junction between the neighboring superconducting regions.

The team used scanning tunneling microscopy and spectroscopy to investigate the properties of electrons around a twin boundary at a range of energies and at different locations.

Very close to the boundary, the energy needed to prise apart a Cooper pair—known as the superconducting gap energy—should theoretically be zero. Once separated, the electrons retain some information about their superconducting state and are called quasiparticles.

But the team found that the superconducting gap never diminishes; indeed, the quasiparticle density is lower than expected even 50 nanometers from the boundary, implying that the boundary had an unexpectedly long-range influence. The team conjectures that the twin boundary creates an additional superconducting gap, making it tougher for Cooper pairs to break up and reducing the number of low-energy quasiparticles produced.

This induced superconducting gap existed in only one of two possible forms—a phenomenon called time-reversal symmetry breaking, which is not possible in conventional superconductors. “We found a new superconducting state that has been theoretically predicted but never verified experimentally,” says RIKEN team member, Tatsuya Watashige.

The researchers also studied a region where two twin boundaries ran parallel to each other, roughly 34 nanometers apart (Fig. 1), and found almost no lowest-energy quasiparticles. “The sandwiched region is effectively protected from low-energy quasiparticles by the induced gaps on both sides,” explains another team member, Tetsuo Hanaguri. “We hope that this new playground may host as-yet-unknown emergent phenomena.”