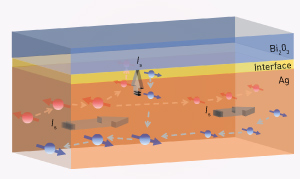 By manipulating the way in which electrons scatter through a silver nanowire, RIKEN researchers have potentially found a method to generate pure spin currents for next-generation magnetic memory devices1.

Spintronic technology requires ways to harness electrons’ quantum spin states—a property that makes electrons behave like tiny bar magnets with either ‘up’ or ‘down’ orientations. To help achieve this goal, Yoshichika Otani and his colleagues of the quantum nanomagnetism research team at the RIKEN Center for Emergent Matter Science are developing ‘lateral spin valves’―spintronic devices that decouple a pure spin current from a conventional electrical current.

The team’s lateral spin valve uses a silver nanowire to bridge a small gap between two nanowires composed of a ferromagnetic nickel−iron alloy. A spin-polarized current injected from the first ferromagnetic contact generates non-equilibrium spin accumulation in the silver nanowire, which in turn drives a pure spin current along the silver wire. Since spin ‘up’ and ‘down’ electrons have different chemical potentials, the second ferromagnetic electrode detects this spin current as a voltage.

Scattering interactions between electrons and surfaces often cause the spin to flip from an up to a down state. Such spin-flip scattering is not always detrimental: because it converts interfacial spin directly into charge currents, it may offer ways to manipulate magnetization or detect spin currents in spintronic devices.

The researchers had previously shown that capping the silver nanowire with a magnesium oxide layer reduced spin-flip scattering when surface−interface scattering was the dominant process. To explore other effects in this system, they coated the silver surface with several different metal oxides.

Most of the coatings had only limited impact on spin flipping, but one exhibited remarkable properties—an interface between bismuth oxide and silver nanowire boosted the flipping probability by an order of magnitude. “We were surprised with this capping layer,” says co-author Shutaro Karube. “Since its results deviate from the mechanisms frequently used to analyze spin relaxation, we surmised that an additional relaxation mechanism must be operating.”

The scientists deduced that the unexpected behavior was due to a ‘Rashba effect’—a phenomenon where spin-polarized energy bands split at interfaces; the splitting depends on the direction of electron movement. This effect can be used to manipulate spins without using magnetic fields, and it causes the silver–bismuth oxide interface to act as a spin absorber (Fig. 1).