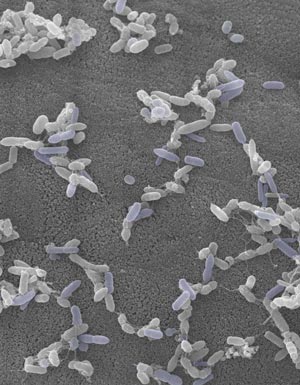 A recent study by RIKEN researchers has shed light on the conundrum of how microbes in the gut can influence the host’s immune system, despite being separated by the gut lining1.

The intestinal wall is a major entry point for infection, and immune cells known as TH17 cells reinforce this barrier and fend off pathogens. Certain ‘commensal’ bacteria in the guts of mammals stimulate the proliferation of TH17 cells.

In rodents, one subset of gut bacteria plays a particularly strong role in this process. “We had previously identified segmented filamentous bacteria (SFB) as one of the most potent inducers of TH17 cells,” explains Takeshi Tanoue, a member of the team, which was led by Kenya Honda of the RIKEN Center for Integrative Medical Science. “Tight adhesion to intestinal epithelial cells is a remarkable characteristic of these microbes.”

The researchers explored whether this adhesion plays a major role in activating immunity in the gut. They began by exploiting the strikingly distinct SFB populations in rats and mice. “About 5–10 per cent of the genes are specific to each strain,” notes Tanoue. Although rat-derived SFBs could proliferate in the mouse intestine and vice-versa, neither population was able to adhere tightly to the intestinal wall after transplantation. This reduced adhesion correlated with a sharp decrease in TH17 induction, indicating that the mere presence of these commensals is insufficient—a tight epithelial interaction is essential. Indeed, pathogenic bacteria that bind to the surface of the intestinal wall during infection also stimulate TH17 proliferation, apparently via a similar mechanism.

These results offer only limited insights into humans, however. “SFBs haven’t been found in the human intestine, and the counterpart TH17-inducing bacteria have not yet been identified,” says Tanoue. The researchers therefore collected fecal samples from human subjects and examined which specimens could act on TH17 cells when transplanted into mice. The results enabled them to identify 20 bacterial strains that appear to play a similar role to mouse SFBs (Fig. 1).

Abnormalities in TH17 activation can contribute to inflammatory bowel disease, and hence a detailed bacterial census may help to diagnose or treat this disorder.

Since the human commensals isolated in the present study came from a patient with inflammatory bowel disease, further experiments are needed to identify the ‘optimal’ gut bacterial community. “We don’t know if these bacteria are pathogenic or beneficial to the host,” explains Tanoue. “We’re now trying to isolate TH17-inducing bacteria from healthy human samples.” In principle, such bacteria could be delivered clinically as ‘probiotics’ to help normalize disease-associated disruptions of gut immunity.