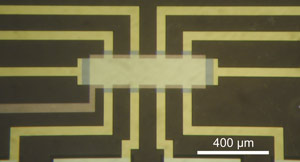 By tweaking the composition and structure of incredibly thin layers of magnetic materials, RIKEN researchers have created devices that make it easier to study a recently discovered phenomenon known as the quantum anomalous Hall effect (QAHE). First observed in 2013, the QAHE causes electrons to flow in unusual ways. The RIKEN devices could reveal exotic physics that might be harnessed for low-power electronics.

Electrons are negatively charged particles that carry electrical current through a conductor. Applying a strong magnetic field at right angles to the current causes the electrons to veer toward one side of the conductor, thereby creating a voltage difference between the conductor’s two sides. This is the Hall effect, first discovered by physicist Edwin Hall in 1879.

The quantum counterpart of this classical effect, the quantum Hall effect (QHE), arises when the conductor is cooled to a low temperature and electrons move through a region with virtually no thickness, such as the interface between two materials. Under these conditions, increasing the magnetic field strength causes the Hall voltage to rise in distinct steps.

The drifting electrons create their own ‘edge current’ that flows without energy loss, leading researchers to believe that the QHE could be exploited to build highly efficient electronic devices. But the QHE requires a very strong magnetic field―a serious drawback for practical applications. So scientists have started looking into magnetic materials that exhibit the QAHE, since, unlike the QHE, the QAHE originates from a material’s own magnetization. This allows edge currents to be generated without applying a magnetic field.

A class of materials called topological insulators is particularly promising in this area. Their interiors are electrical insulators, but they possess conducting surfaces. Their magnetic properties can be altered by seeding them with traces of elements such as chromium. “When topological insulators are doped with magnetic ions, ferromagnetism emerges in their interiors,” says Ryutaro Yoshimi of the RIKEN Center for Emergent Matter Science, who is investigating the QAHE.

Unfortunately, the QAHE has only been observed in topological insulators at extremely low temperatures, typically less than a few tenths of a degree above absolute zero. To study these quantum Hall effects and to make them more practically useful, Yoshimi and his colleagues are trying to raise that temperature. Their approach involves optimizing the composition of topological insulators and then stacking high-quality thin films of these materials. This has allowed them to reduce the crystal defects and structural disorder in these systems, significantly raising the temperature at which the QAHE emerges.

In their latest investigation, the researchers studied a topological insulator called bismuth antimony telluride (BST). They laid a 5-nanometer-thick film of the material on an indium phosphide substrate and added a 2-nanometer layer of chromium bismuth antimony telluride (CBST) on top. BST is nonmagnetic, but adding chromium atoms makes the resulting CBST layer magnetic.

The scientists tested samples with five slightly different chemical compositions and obtained the most promising results from a blend containing just over seven times more antimony than bismuth. They then used BST and CBST films of this composition to create a field-effect transistor (Fig. 1). This enabled the researchers to use a voltage to control the electron density in the materials while using an applied magnetic field to fine-tune the device’s quantum Hall properties.

They found evidence of quantum Hall behavior in two parts of the device: on the top surface of the CBST layer and on the bottom of the BST layer. They also discovered that the effect on top of the CBST layer was caused by the material’s intrinsic magnetization, whereas the effect below the BST layer was generated by the external magnetic field1. “This is a hybrid effect of QHE and QAHE,” says Yoshimi. “It has never been observed that two surface states in one thin film quantize with different origins.”

Crucially, these quantum Hall states were seen at 2 kelvin, a considerably higher temperature than in single-layer films of BST or CBST. This might be because the two-layer structure avoids some of the disorder that occurs at the interface between a single layer of CBST and its indium phosphide substrate. Yoshimi says that these results could help to design other semimagnetic devices based on topological insulators, and thus allow the behavior of these materials to be explored further. 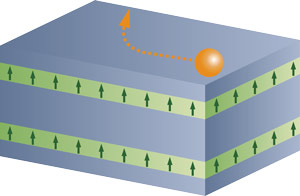 In another recent study, the researchers found that stacking more layers of these materials stabilizes the QAHE at higher temperatures2. They compared a single layer of CBST with two other structures: a three-layer structure in which a BST layer is sandwiched between two CBST layers and a five-layer structure of alternating BST and CBST layers (Fig. 2).

“Chromium concentration is one of the key parameters for maximizing the observable temperature of QAHE in the five-layer system,” says Yoshimi. More chromium increases the intrinsic magnetization of the material, which can stabilize the QAHE, but it can also increase disorder at the interface between the layers, which reduces the QAHE. To find the best balance between these two factors, the researchers tested various compositions. They found that the optimum chromium concentration was a little richer than that in their previous experiments.

“By inserting 1-nanometer-thick layers heavily doped with chromium, we stabilized and clearly observed the QAHE up to 1 kelvin,” says Yoshimi. That temperature is over ten times higher than that for a single-layer CBST ﬁlm, and, importantly, it does not require applying an external magnetic field, unlike the above-mentioned CBST two-layer structure. “This paves the way to deepen research on edge currents that flow without dissipating energy in the absence of an external magnetic ﬁeld and to further explore exotic topological phenomena,” he says.

Ryutaro Yoshimi was born in Tokyo, Japan, in 1988. He received his bachelor’s (2011) and master’s (2013) degrees at the University of Tokyo’s Department of Applied Physics and is continuing his research as a doctorate student under the supervision of Yoshinori Tokura, director of the RIKEN Center for Emergent Matter Science. He is supported by a Research Fellowship for Young Scientists from the Japan Society for the Promotion of Science, as well as through RIKEN’s student trainee program. His current interests include the quantum transport of Dirac electron states at the surface and interface of topological insulators.