Tuning in to soft vibrations 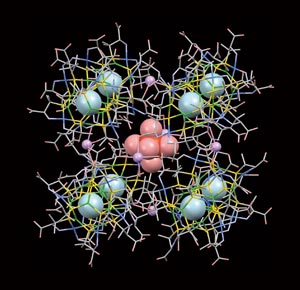 Figure 1: Copper-rich metal clusters can form several different aggregates, including this cubic structure, which was analyzed using the technique of terahertz absorption spectroscopy. Reproduced from Ref. 1 with permission of The Royal Society of Chemistry

Metal cluster complexes are important molecules in nature and industry alike: they help plant leaves capture energy from sunlight as a key cog in the machinery of photosynthesis and are used as powerful catalysts in industry.

But to fully understand each cluster’s mode of action, better information is needed about the structure of these clusters and their aggregates, says Hal Suzuki of the RIKEN Center for Advanced Photonics. “Most structural studies of these substances have used x-ray diffraction, but it has a weak point―the target material must be a crystal,” he says. Since terahertz spectroscopy does not require crystals, it is expected to become a powerful analytical tool.

To demonstrate the technique’s potential for studying these structures, Suzuki and another RIKEN researcher, Chiko Otani, collaborated with two researchers from Osaka University to analyze a recently discovered metal cluster complex that contains 14 copper ions (Fig. 1). These complexes form large, porous aggregates whose voids are filled with water molecules.

“By slightly tweaking its synthesis conditions, this cluster complex can be aggregated into different crystal structures,” Suzuki explains. “It can thus be used as a model substance to reveal the general rules behind aggregation of cluster complexes.”

Using terahertz spectroscopy, the researchers were able to track structural changes in each aggregate as it was heated to drive out the water molecules. The technique revealed that the aggregates became disordered as the component clusters became distorted by the loss of water molecules.

“There is still more that terahertz spectroscopy, in combination with other techniques, can tell us about these complexes,” Suzuki says. “The next step is to reveal the role of water molecules in building up the cluster complexes as well as the crystalline forms.”