The safe and environmentally friendly pesticide Kaligreen has been approved for sale in 15 countries and regions worldwide, and is in the process of being registered in about ten more. © 2016 RIKEN

The fungus spreads slowly, hibernating through winter in the dried and diseased branches of citrus trees. Come spring, it disperses its spores in raindrops that fall on budding leaves and branches. The pathogen then creeps to the fruit stems, where it waits until fall’s harvest to spread a shadow of rot over the fruit.

In the early 1970s, Yutaka Arimoto, then a young researcher at RIKEN, wondered why the invasion of the citrus tree fungus Diaporthe citri followed the seasons. Perhaps that cycle could be used to defeat it, he thought. Having grown up on a farm, Arimoto had seen firsthand the damage pests and diseases cause to crops, but he also knew that many pesticides used to prevent them were later taken out of use. “Unexpected things can happen, and there is never a guarantee that current testing methods are infallible,” he says. “No chemical is 100 per cent safe, but by selecting compounds that people have been consuming for a long time without adverse effects, we assume that there is a very small chance of unexpected problems arising.”

Arimoto's resolution to search for environmentally friendly products with antifungal properties launched him into a career developing commercial pesticides from edible chemicals, which he refers to as SaFE (Safe and Friendly to the Environment) pesticides. But the path has not always been easy.

“When doing research, you inevitably run into walls that prevent further progress,” says Arimoto, who now heads his own laboratory at the RIKEN Innovation Center. “But it can be exhilarating when you finally find a small crack in the wall, expand the crack and squeeze through the wall.”

Today, a growing community of organic farmers is creating a demand for agricultural products that ensure the productivity, health and safety of soils, plants, animals and people.

When considering the seasonal advance of Diaporthe citri, Arimoto wondered whether antifungal substances produced in citrus tree stems dwindled when the citrus was harvested, making it vulnerable to attack. His hunch proved right: he discovered that a yellowish compound called hesperidin in the stem, when mixed with other common household products such as potassium bicarbonate and sodium bicarbonate, killed the fungus. Further experiments on other pathogens produced similar fungicidal results, even—much to Arimoto’s surprise—when the mixtures did not contain hesperidin.

The mixtures contained sodium bicarbonate, more commonly known as baking powder and a standard treatment for heartburn and indigestion. Its close relative, potassium bicarbonate, is also a popular food additive in fizzy drinks, chocolate and canned milk. “It’s safe to say that it is very unlikely that compounds that have been approved for use in these ways will lead to environmental problems,” Arimoto comments.

Solutions of sodium and potassium bicarbonates turned out to be especially good at protecting against powdery mildew, a fungal disease that affects wheat, barley and grapes, among other plants, and can decimate farmers’ yields by almost half.

In 1982, after several years of testing and field trials, Arimoto registered his first sprayable pesticide containing sodium bicarbonate, branded Noslan wettable powder. But just as the team was about to launch their new product on the market, disaster struck. “Harmful toxic effects were reported in strawberries and we had to halt development,” he says. Twelve years had passed since Arimoto began investigating compounds for use in agriculture, and he was yet to find a success. 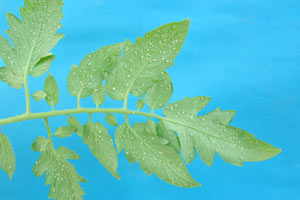 Undeterred, Arimoto looked for ways to prevent the sodium bicarbonate from crystallizing on plant leaves. Eventually, he discovered an ingredient that could encapsulate the sodium bicarbonate in higher doses, so that only a tenth of the original solution needed to be sprayed on plants. The surfactant is also a common food emulsifier.

With the original Noslan research group disbanded, Arimoto initiated discussions with a company manufacturing potassium bicarbonate. In 1993, Toagosei Co., Ltd launched the product Kaligreen, and Arimoto watched as it began to fly off the shelves. “It was a very moving experience,” recalls Arimoto. “At first, I didn’t think we would do so well, but we were inundated with so many orders that production couldn’t keep up.”

Kaligreen has since been approved for sale in 15 countries and the list keeps growing. Soon after it went on sale in the United States, a farmer growing grapes for organic wine requested that the fungicide be certified by the Organic Materials Review Institute. It was listed in 1999.

Kaligreen was the first of seven SaFE products that Arimoto’s team has launched. The list includes the fungicides G-FINE and Harmomate, which also contain sodium bicarbonate. In November 2015, a remedy against a disastrous tomato virus was approved for release. “Bemidetouch Emulsion has an intriguing effect on the silverleaf whitefly,” explains Arimoto. The silverleaf whitefly transmits the tomato yellow leaf curl virus, which stunts the growth of tomato plants, sometimes causing farmers to lose their entire harvests.

Arimoto’s insect repellent contains a substance that tricks the whitefly into thinking that a plant is not the right species to parasitize. The male whitefly usually mates by sending out signals that lure female whiteflies to the same leaves. Bemidetouch prevents this pairing by weakening the male signal.

In 2011, Arimoto’s decades of research were acknowledged when he received a national merit award for his contributions to industry, academia and government through the promotion of SaFE pesticides.