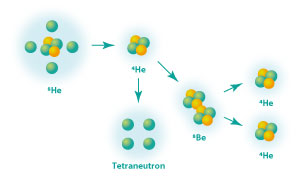 Figure 1: By firing a beam of neutron-rich helium nuclei (8He) at a target of normal helium nuclei (4He) and analyzing the collision products, researchers have found compelling evidence for the fleeting existence of the four-neutron system, the tetraneutron. © 2016 Keiichi Kisamori, RIKEN Nishina Center for Accelerator-Based Science

Among nuclear physicists, a system consisting of four neutrons―aptly named the tetraneutron―has assumed the mythical status of the Loch Ness Monster. Several experimental sightings have been reported in the literature, but they have failed to convince the nuclear physics community, which remains skeptical about the particle’s existence. RIKEN scientists have recently found the most tantalizing evidence yet that the beast actually does exist.

Since neutrons are electrically neutral and do not repel each other, the tetraneutron might naively be assumed to be even more stable than its extremely stable cousin, the helium nucleus (two positively charged protons and two neutrons). But quantum physics prohibits two identical ‘fermions’ (elementary particles that include neutrons and protons) from occupying the same quantum state simultaneously. Consequently, nuclei consisting of approximately equal mixtures of protons and neutrons (such as helium nuclei) are the most stable, whereas the all-neutron tetraneutron is predicted to be too energetically unstable to exist.

Now, a 51-member team led by Keiichi Kisamori at the RIKEN Nishina Center for Accelerator-Based Science and Susumu Shimoura of the University of Tokyo has obtained strong experimental evidence that the tetraneutron exists, albeit in a unstable resonance form rather than as a stable bound nucleus1.

The existence of the tetraneutron would be far too fleeting (it probably lasted for just 10−21 seconds) to observe directly. But by considering the energies of all the particles involved, it could be inferred at a 4.9-sigma significance level―just shy of the five-sigma level that is the gold standard for establishing something statistically.

The finding has generated much excitement. “The nuclear physics community is very surprised,” says Kisamori. He notes that the finding has both inspired theoreticians to conduct new calculations and emboldened experimentalists to renew searches for the tetraneutron.

“We have paved the way to a firmer understanding not only of the fundamental properties of nuclear forces, but also of the structure of neutron stars,” says Kisamori, referring to the incredibly dense remnants left after supernova explosions that consist entirely of neutrons.

The scientists intend to conduct experiments on other nuclear reactions to improve the statistics and to explore new aspects of tetraneutron physics.