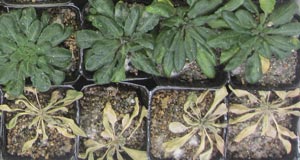 A single genetic change is all it takes to make plants produce more biomass and become more resilient to stress, a team of RIKEN researchers has found1. This advance, which is important in light of global climate change, will facilitate research into these processes and efforts to improve them.

The team had previously studied a family of four genes known as pseudo-response regulator (PRR) genes, which regulate a plant’s biological clock by repressing the expression of other clock-related genes. They found that although mutations in individual PRR genes had little effect, plants with three of the four genes disrupted tended to flower later, tolerate drought better and produce more biomass.

However, establishing and maintaining three mutations in different species is time consuming and difficult, limiting broader applications of the method. To overcome this problem, a team led by Norihito Nakamichi and Hitoshi Sakakibara of the RIKEN Center for Sustainable Resource Science engineered a modified version of one of the genes, PRR5, to consistently activate its target genes.

The new construct, PRR5-VP, effectively eliminates the role of the PRRs by activating genes that they would normally repress. The resulting PRR5-VP plants exhibited the same late flowering, biomass increase and stress tolerance seen in the triple mutants.

In stress tests, a single day of freezing temperatures killed all the normal plants, but only half of the PRR5-VP plants. The PRR5-VP plants were also drought-tolerant, surviving a 16-day imposed drought that killed nearly all of their normal kin (Fig. 1). Similarly, the engineered plants weathered salinity stress significantly better.

The PRR5-VP plants produced about twice as much biomass as their normal counterparts. While the increase was accompanied by slower growth, this drawback might be alleviated by precisely controlling when and where PRR5-VP is switched on.

“This was a proof-of-concept study, and I’m satisfied because the data were very beautiful and clearly demonstrate that this approach works,” says Nakamichi.

Since PRR5-VP is a single genetic construct, it can be easily introduced to other species for further research or biotechnological applications. Follow-up work will investigate genes downstream of PRR5, which seems to act as a nexus of several pathways—Nakamichi’s team showed that PRR5 increased biomass by delaying flowering but improved stress tolerance by regulating other processes.

The team will also investigate the role of PRR5 in different species. “In other plants, PRR5 might regulate physiological processes not found in the model species Arabidopsis,” says Nakamichi. “This approach may reveal aspects of the evolution of the biological clock’s genetic network.”