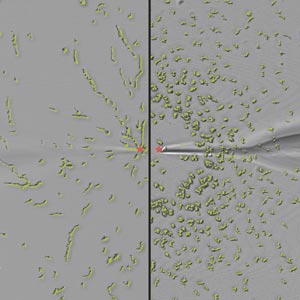 For many cells, growth and migration are directed by the concentration of attractive molecular signals in their environment. Using the slime moldDictyosteliumas a model, RIKEN scientists have uncovered a novel mechanism that governs the remarkable sensitivity of this response, which is known as chemotaxis.

One of the chemical lures that stimulate chemotaxis in Dictyostelium is a molecule called cyclic adenosine monophosphate (cAMP). Yoichiro Kamimura at the RIKEN Quantitative Biology Center notes that Dictyostelium has an extremely fine-tuned ability to respond to even minor local increases in cAMP levels. “Cells can detect a very small density difference—as small as a few per cent—over a range of concentrations that spans as much as 100,000-fold,” he says. How cells achieve this feat, however, remains poorly understood.

cAMP acts on a class of protein known as G-protein-coupled receptors (GPCRs), which reside in the cellular membrane and initiate changes in cell behavior via activation of heterotrimeric G-protein complexes. Kamimura and colleagues identified a protein called Gip1 that interacts with this G-protein and appears to play a critical role in establishing the sensitivity of Dictyostelium chemotaxis. They showed that cells deficient in Gip1 could react appropriately to low concentrations of cAMP, but largely lost their ability to process signals from higher concentrations of this molecule1 (Fig. 1).

Subsequent experiments revealed that, in the absence of chemotactic signals, Gip1 normally keeps G-protein localized in the cellular interior. The interaction between cAMP and GPCRs generates a cue for the G-protein to separate from Gip1 and migrate to the cell membrane, where it contributes to the chemotactic response.

Based on these findings, the researchers conjecture that sequestration by Gip1 establishes a biased internal distribution of G-protein that ensures that cells can respond effectively to high concentrations of chemotactic signals. Kamimura notes this is the first time that such a molecular mechanism has been observed for controlling the dynamic range of signals to which cells can respond.

Many mammalian cells employ chemotaxis, and Kamimura points out that a similar process may control the migration of white blood cells toward disease-associated signals in the body. As a next step, the team will explore precisely how Gip1 controls G-protein localization.

Given that GPCR signaling is involved in numerous other cellular processes—including many diseases—these findings could have implications that extend well beyond chemotaxis. “This study could be a seed that grows into a new molecular tool for manipulating G-protein activity,” says Kamimura.